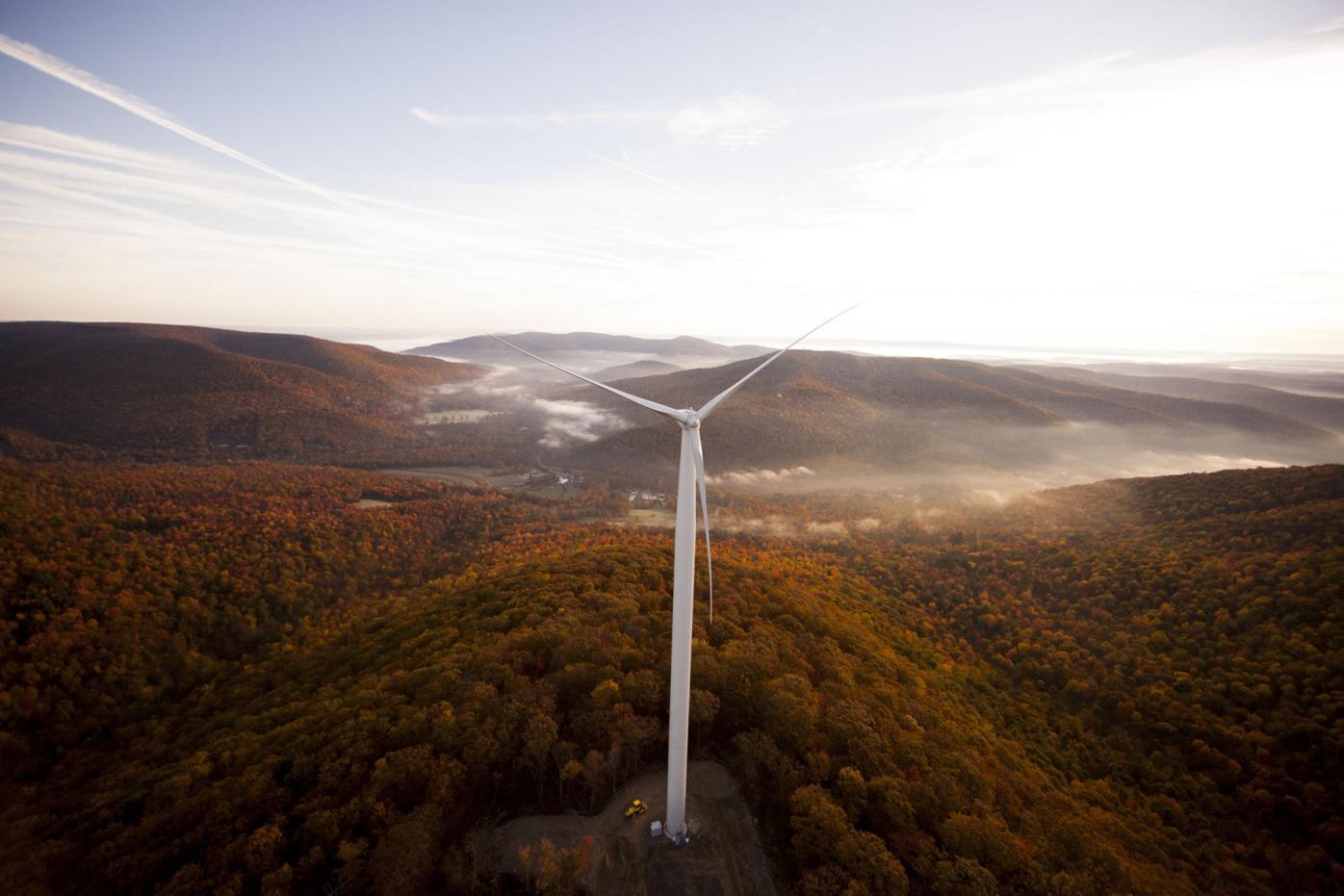 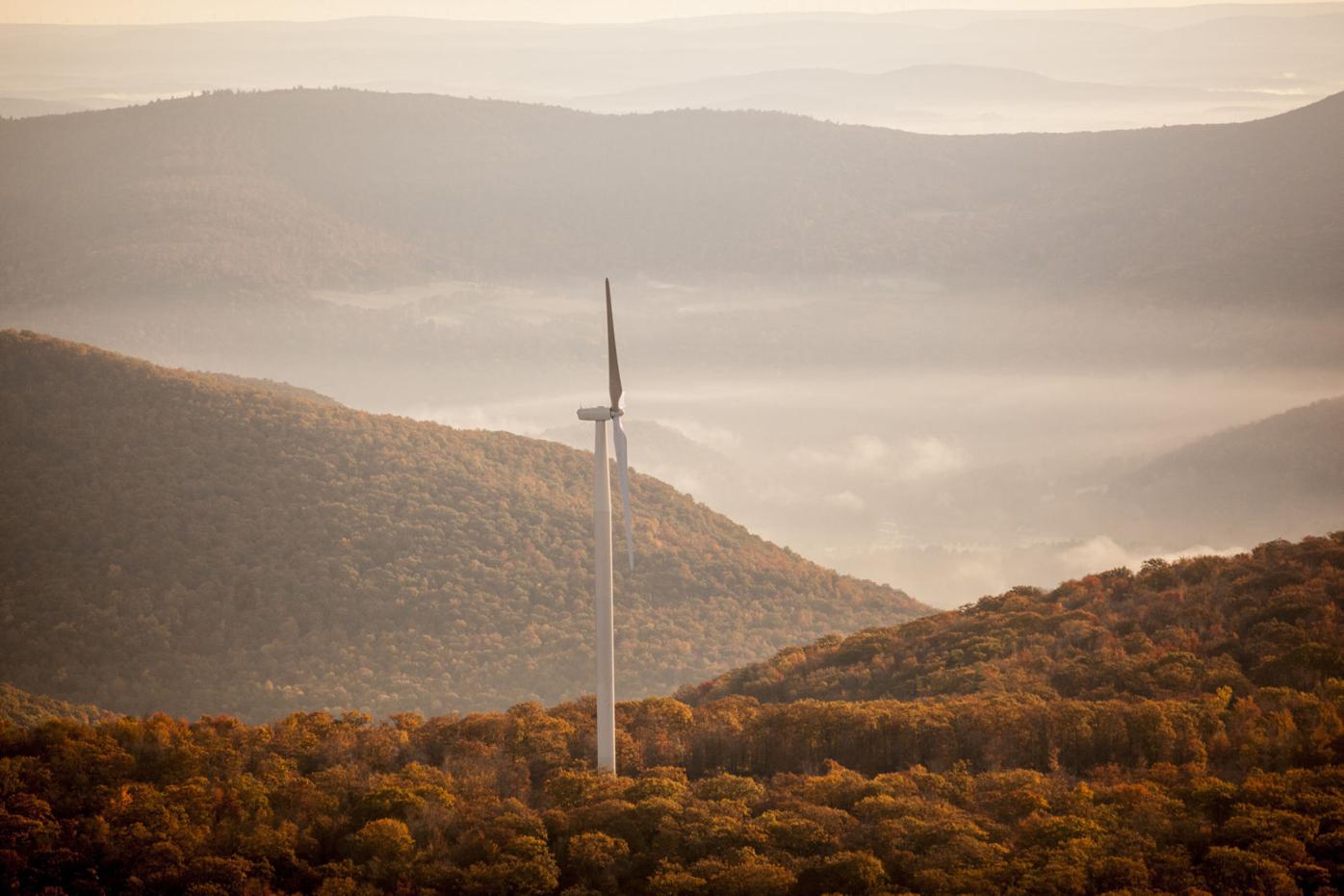 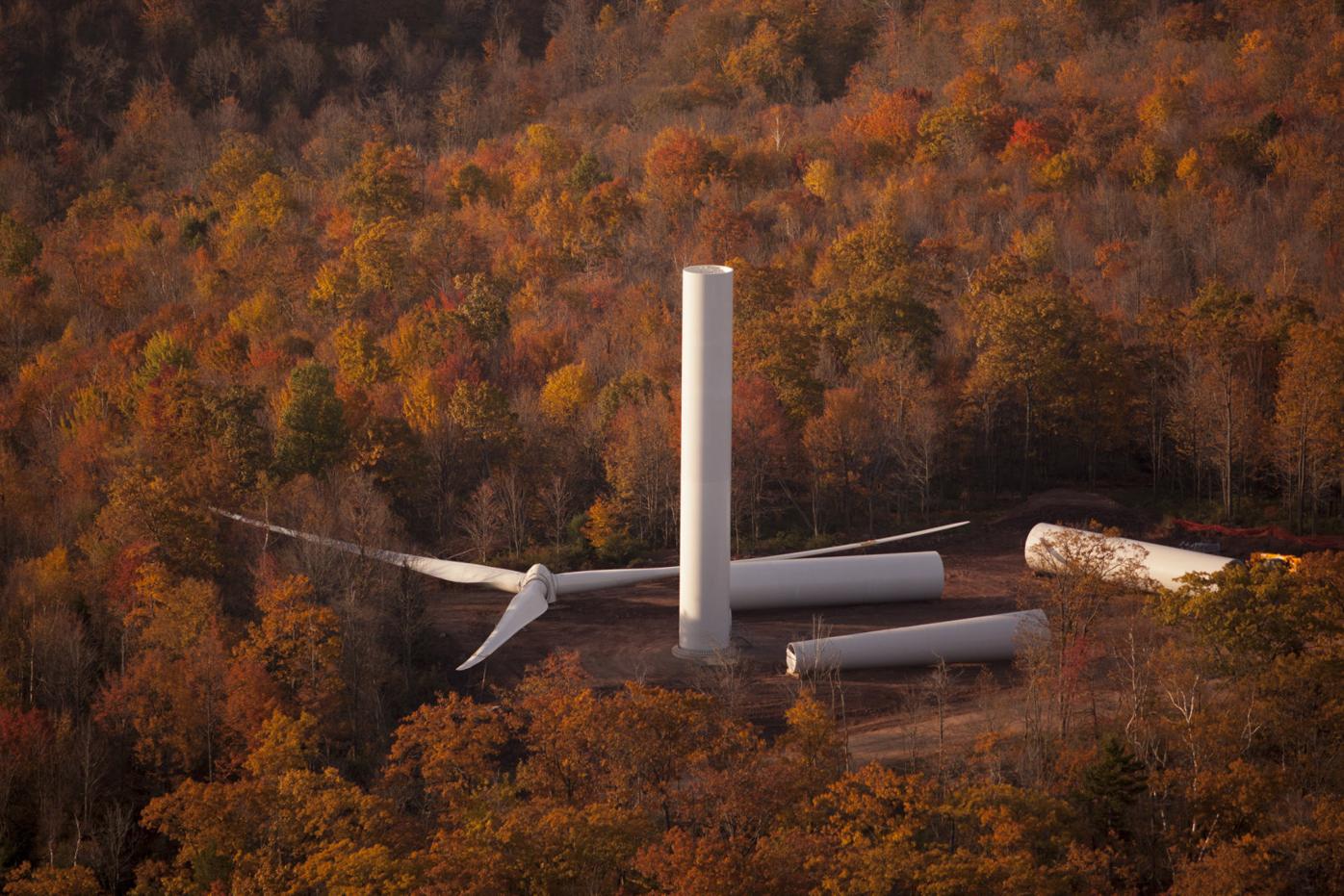 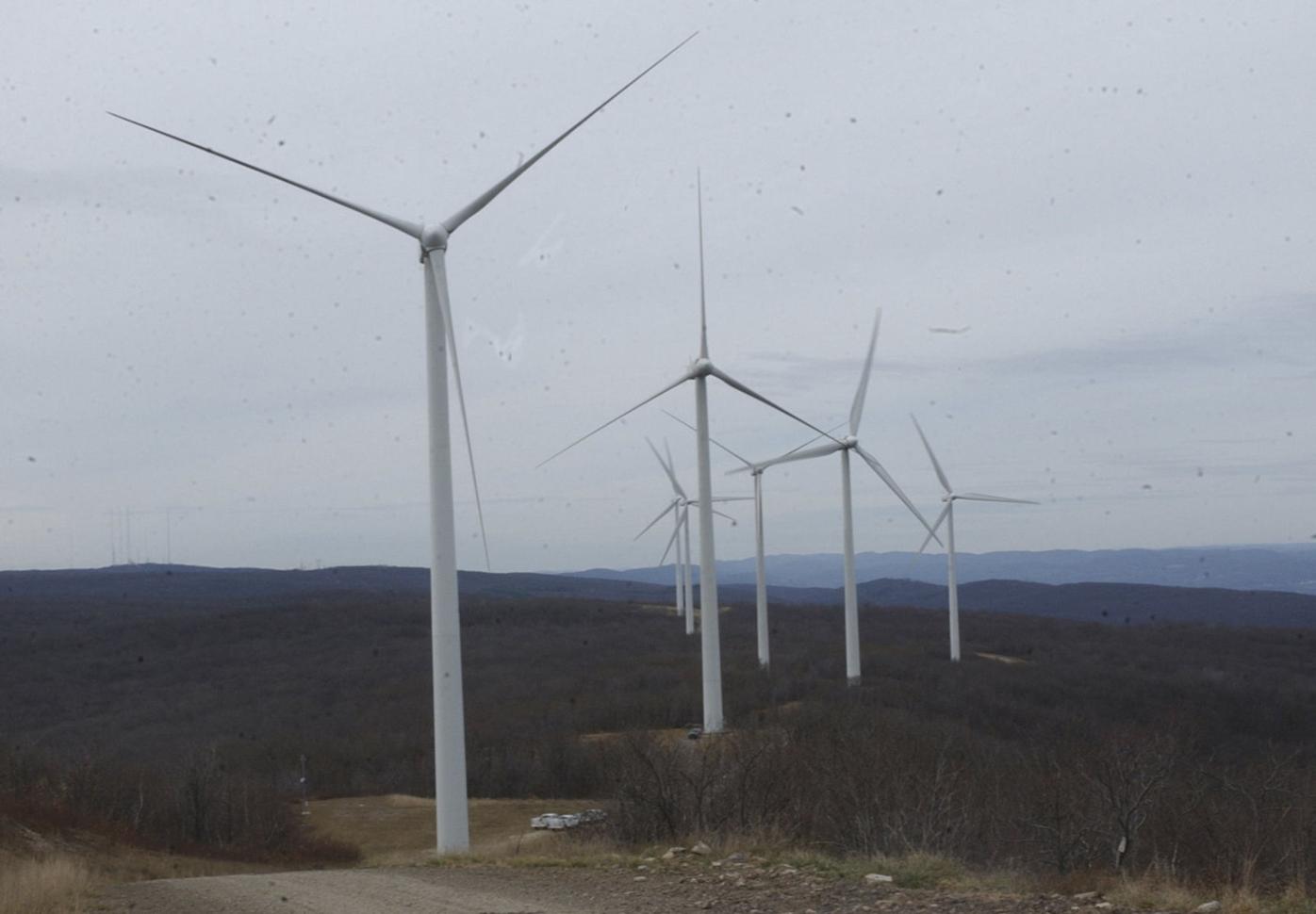 The turbines at the Bear Creek Wind Farm spin in a brisk breeze recently. 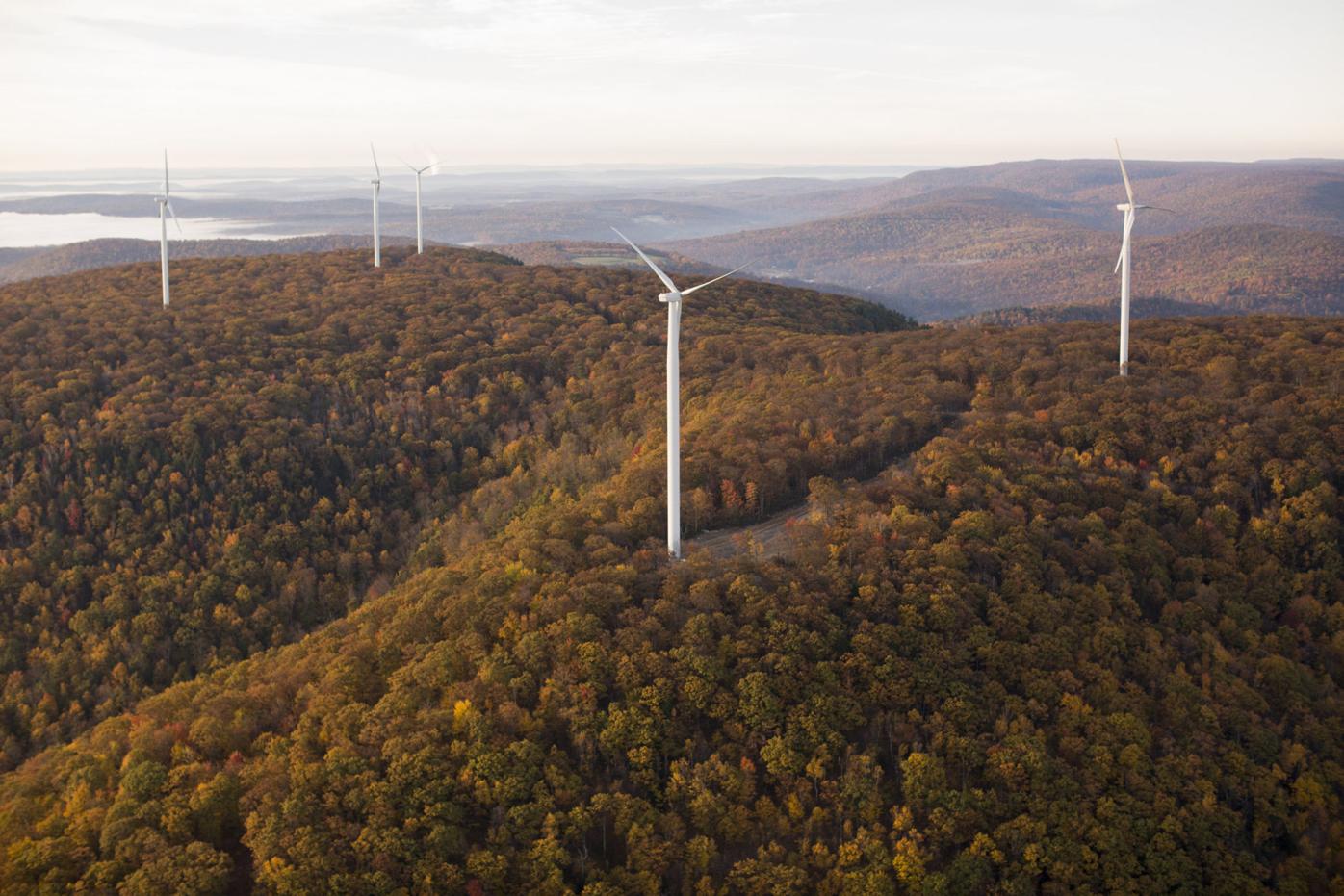 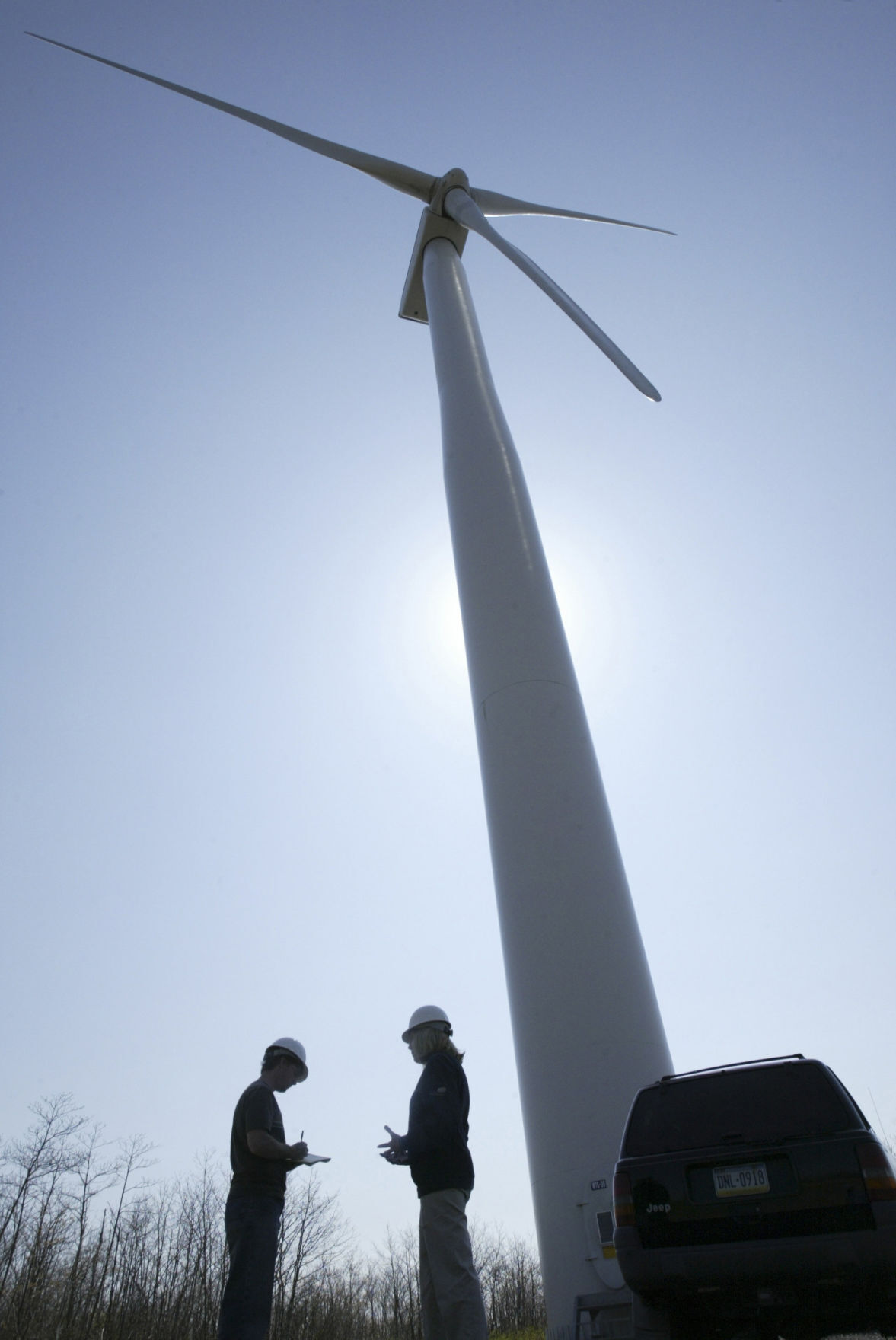 times-shamrock fileTwo workers confer under a windmill at the Waymart Wind Farm in Wayne County. A new study stresses the importance of renewable energy to the state's future. 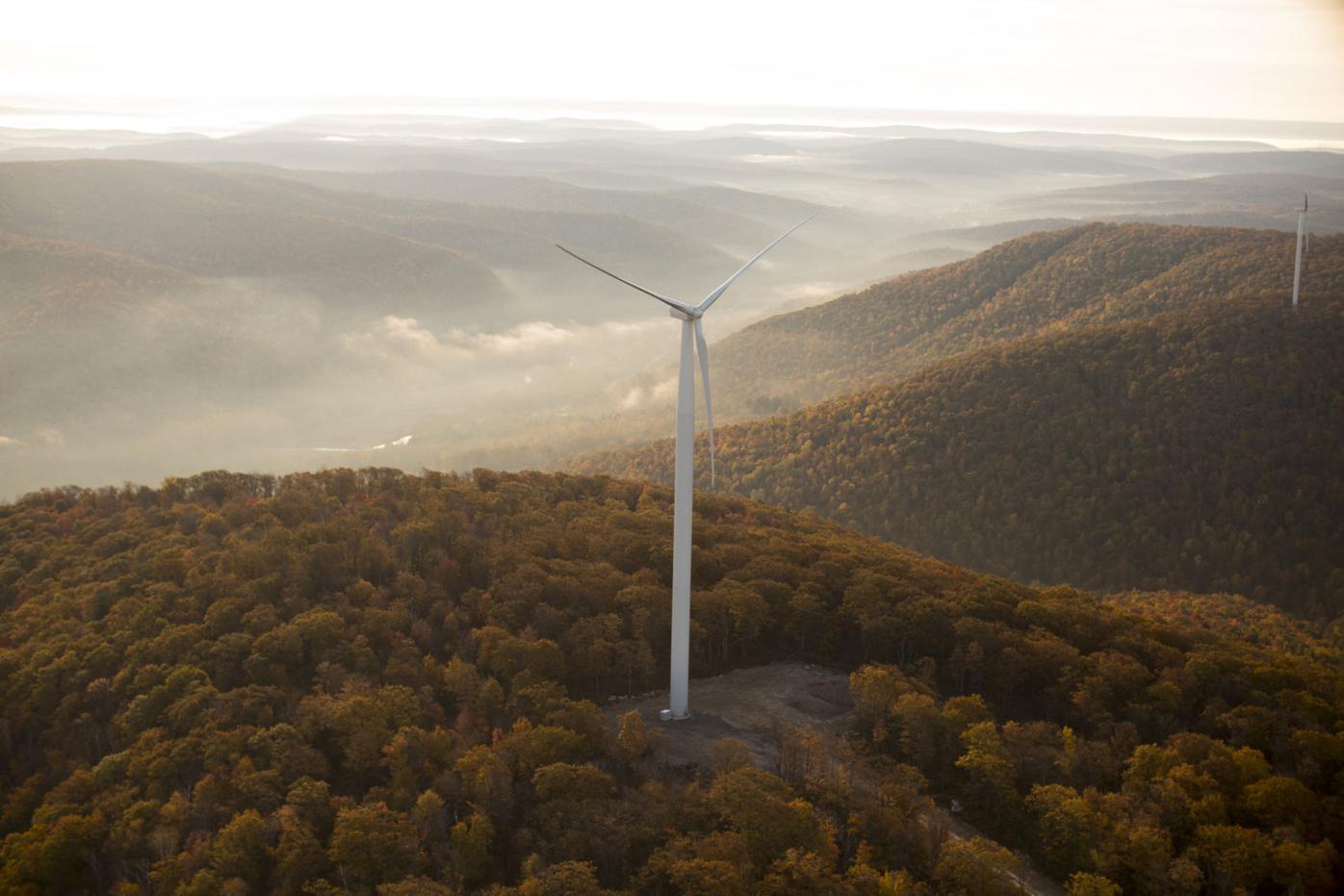 The Mehoopany Wind Farm in Wyoming County is the state’s largest. 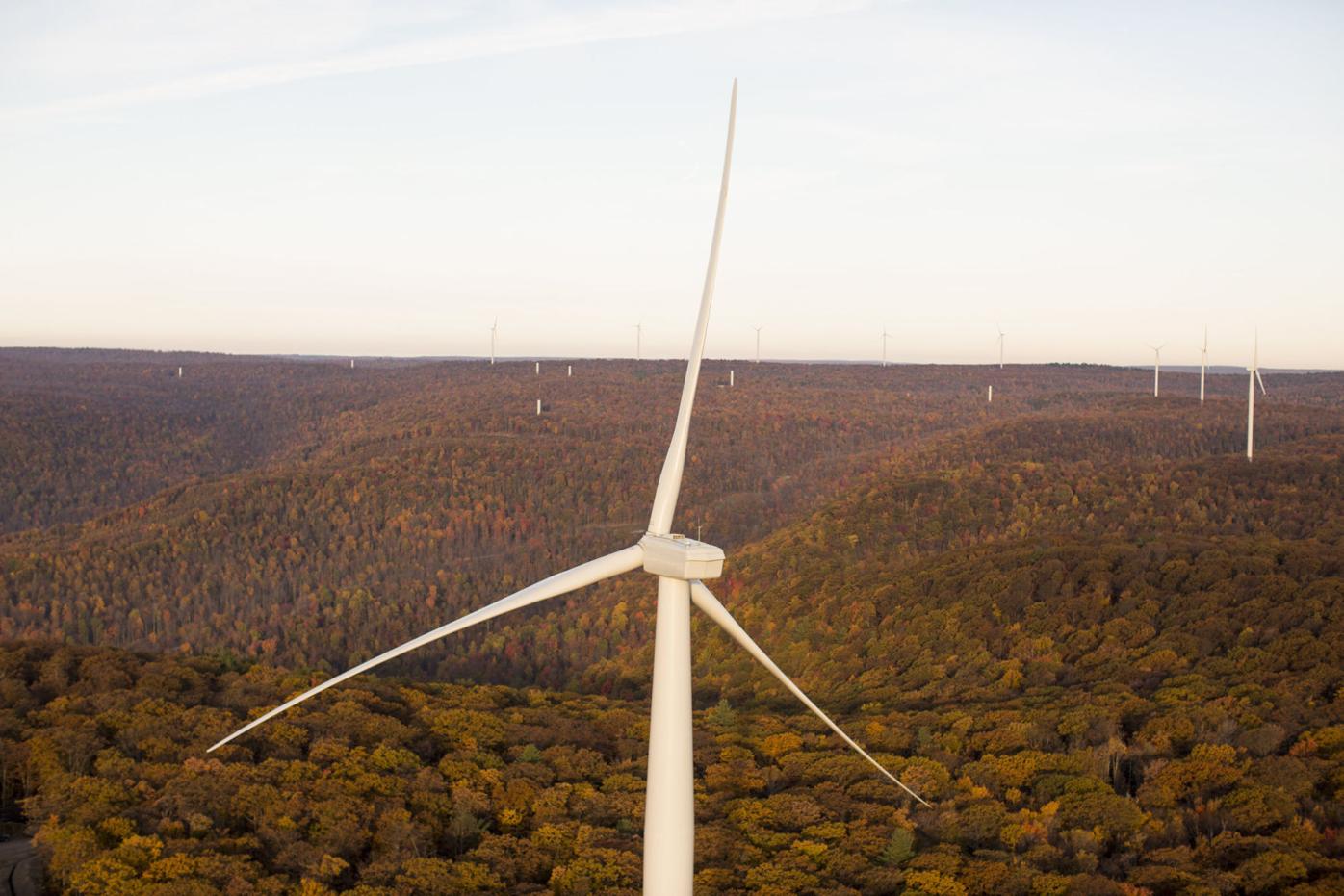 The turbines at the Bear Creek Wind Farm spin in a brisk breeze recently.

times-shamrock fileTwo workers confer under a windmill at the Waymart Wind Farm in Wayne County. A new study stresses the importance of renewable energy to the state's future.

The Mehoopany Wind Farm in Wyoming County is the state’s largest.

That means there is room for growth in an industry managed in the state by power companies from across the country.

Twenty-six industrial wind farms have been harnessing Pennsylvania wind since early 2021. While most of these expanses of giant, tower-mounted propellers are in the southwest-central sections of the state, three are located in Northeastern Pennsylvania.

One of those, the Mehoopany Wind Farm in Wyoming County, is the state’s largest. It has been in operation since December 2012, according to a company spokeswoman. Its 88 turbines spaced out across ridge tops spanning about 9,000 acres in Forkston, Noxen, Eaton and Mehoopany townships have a capacity to generate 140.8 megawatts (MW) of power each hour, though industry watchdog National Wind Watch reports that wind turbines rarely reach capacity.

The reason is those giant propellers that turn the turbines are dependent on the wind speed.

One megawatt is equivalent to 1 million watts. Power production over time is measured in megawatt-hours (MWh) or kilowatt-hours (kWh) of energy. A kilowatt is 1,000 watts. Production of power at the rate of 1MW for 1 hour equals 1MWh of energy.

Somerset County hosts the most wind farms with eight and the most turbines — 198 — according to the Institute for Energy at St. Francis University in Loretto, near Pittsburgh.

American Electric Power, whose subsidiary AEP Renewables operates the Mehoopany Wind Farm, is planning to increase its production of renewable energy — solar and wind — more than twelve-fold by 2030, according to AEP Renewables spokeswoman Sarah Devine, who is based in Columbus, Ohio.

“American Electric Power continues to integrate renewable resources into our generation portfolio to achieve a more balanced fuel mix,” Devine said. “In 2005, coal represented 70 percent of our generation mix, while natural gas represented 19 percent and renewables 4 percent. By 2030, we project coal will make up 18 percent of our fuel mix, natural gas 21 percent and renewables 51 percent. We plan to add nearly 16,600 megawatts of regulated wind and solar through 2030 and will invest $4.9 billion in renewables through 2025.”

There is no immediate expansion planned for the Mehoopany Wind Farm, a joint venture with AEP Energy, AEP’s competitive energy subsidiary, and BP Wind Energy.

She said shifting the company’s generation resources to more wind, solar and hydro will help it reach its goal of net zero carbon dioxide emissions by 2050, with an interim goal to cut emissions 80 percent from 2000 levels by 2030.

“AEP’s net-zero goal gives us the opportunity to help shape our nation’s clean energy future, and the majority of our peer utilities have also made similar net-zero or carbon-free goals.”

Devine said AEP considers ways to reduce the impact on birds and bats before construction begins.

“This typically includes two years of preconstruction surveys to ensure we are following the guidelines put out by the U.S. Fish and Wildlife Service,” Devine said. “We use these surveys to locate equipment for our projects as well as develop plans to mitigate impacts during construction and operations.”

“Clean energy resources like wind energy are critical to improving air quality in Pennsylvania, protecting the health of residents and helping to reduce Pennsylvania’s carbon footprint and address climate change — the most important environmental threat confronting the world,” said state Department of Environmental Protection Secretary Patrick McDonnell. “Pennsylvania’s clean energy portfolio includes electricity generated from renewable sources such as wind, solar and hydroelectric, as well as nuclear, energy conservation and energy efficiency, and energy storage. Pennsylvania has a robust clean energy sector that provides tens of thousands of good paying jobs in clean technology and energy efficiency businesses across the state, including over 2,700 jobs in wind energy as of the end of 2020.”

According to National Wind Watch, a nonprofit, tax-exempt, charitable organization that publishes information online about industrial wind power, every wind turbine has a range of wind speeds, typically around 30 to 55 mph, in which it will produce at its rated, or maximum, capacity.

“At slower wind speeds, the production falls off dramatically,” according to the group’s website. “On average, therefore, wind turbines do not generate near their capacity. Industry estimates project an annual output of 30-40 percent, but real-world experience shows that annual outputs of 15-30 percent of capacity are more typical.”

The Waymart Wind Farm in Wayne County’s Canaan and Clinton townships began operation in October 2003 and is host to 43 turbines with a capacity of 64.5MW.

Former owner Florida Power & Light, a subsidiary of NextEra Energy Inc., of Juno Beach, Florida, sold that wind farm and five others around the country to Quinbrook Infrastructure Partners Ltd., in January of 2018. A subsidiary, Huntsman Wind LLC, operates the Waymart facility.

The Bear Creek Wind Farm, in Bear Creek Township, Luzerne County, has been operating since February 2006. It is home to 12 turbines that have a total capacity of 24MW.

Representatives of the Waymart and Bear Creek wind farm owners could not be reached for comment for this story.