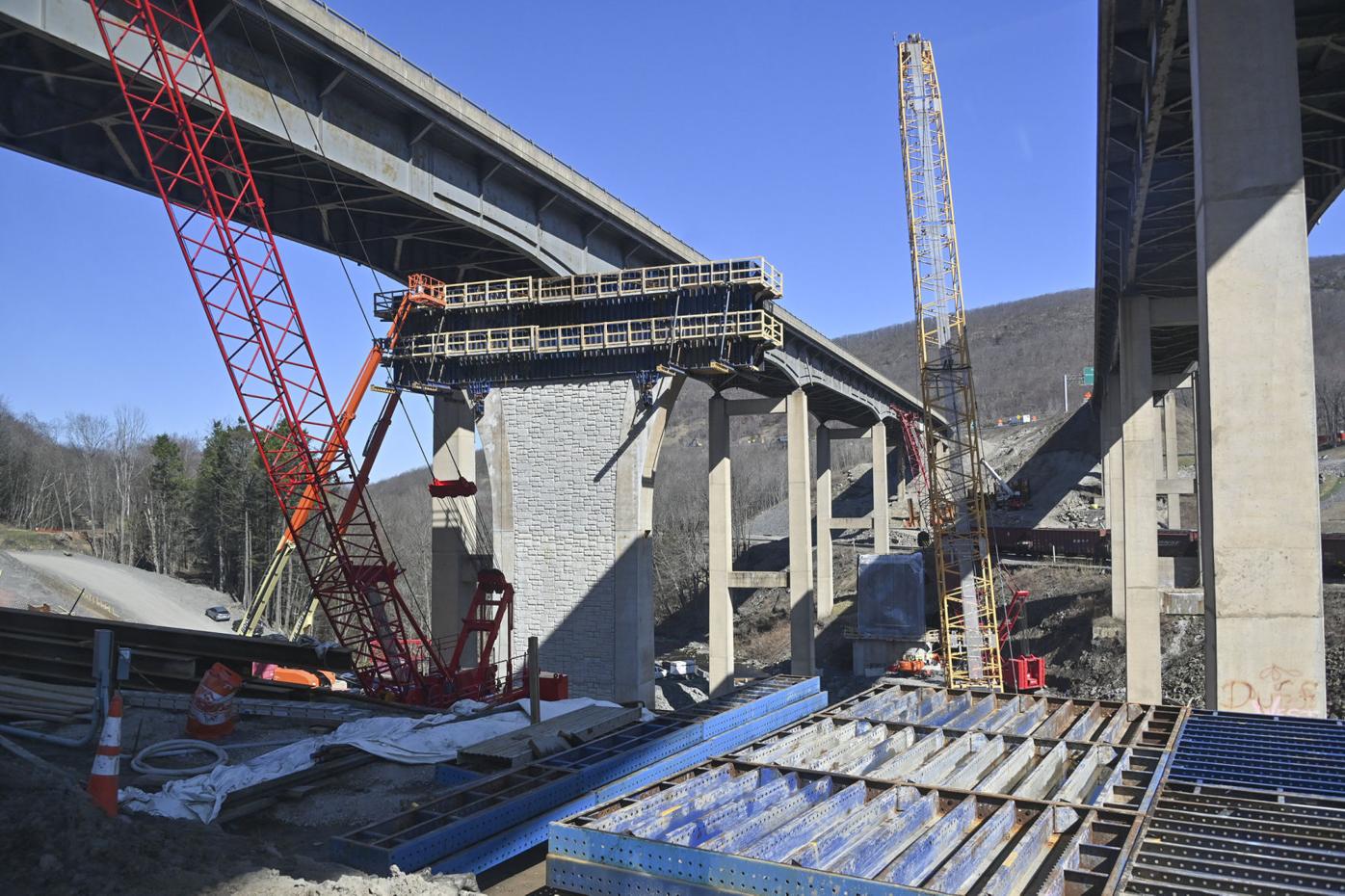 The view below the Interstate 84 twin bridges in Dunmore.

A tractor-trailer travels east on Interstate 78 in April in the Lehigh Valley area. 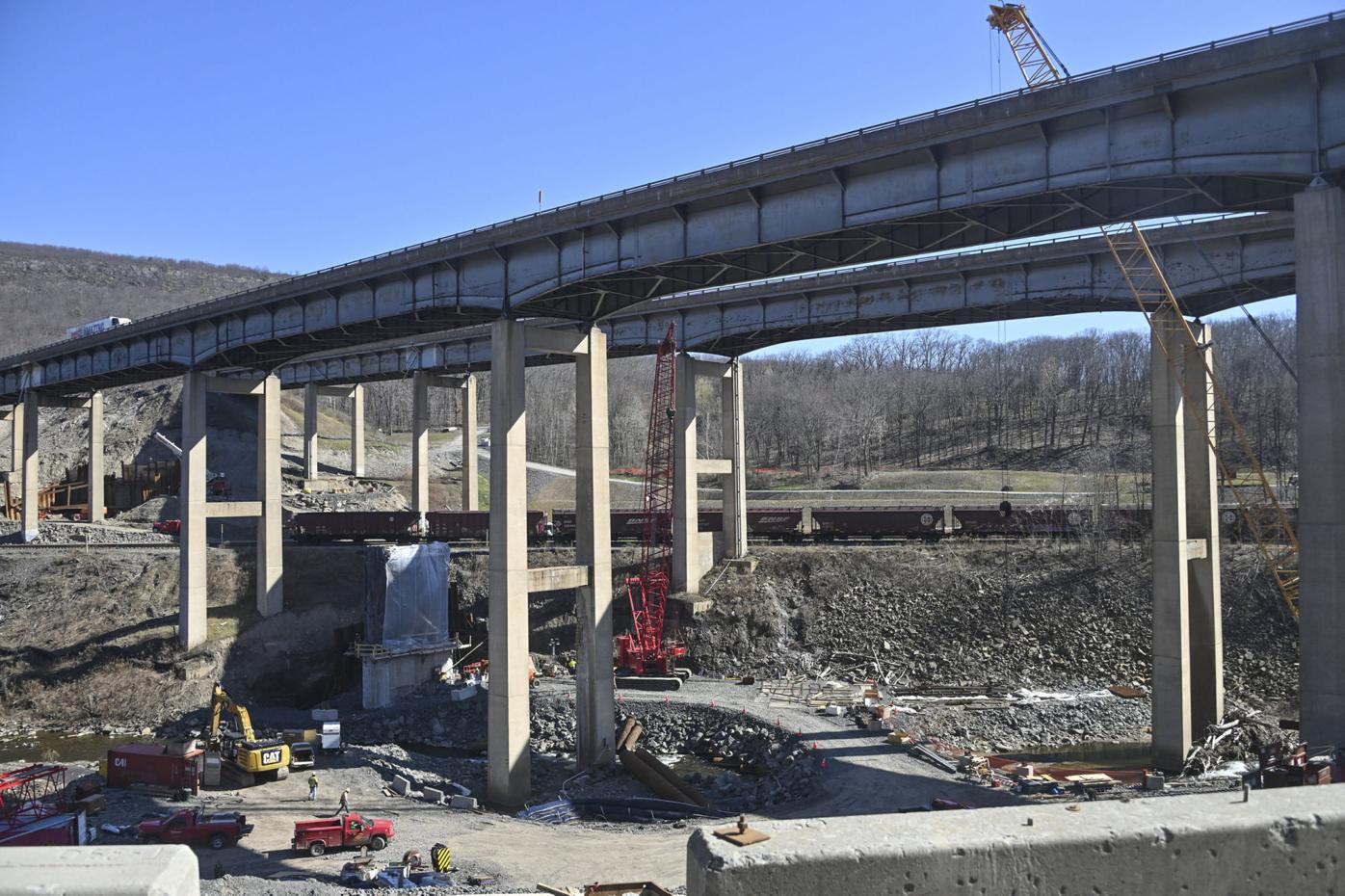 PennDOT has started replacing the Interstate 84 twin bridges in Dunmore. 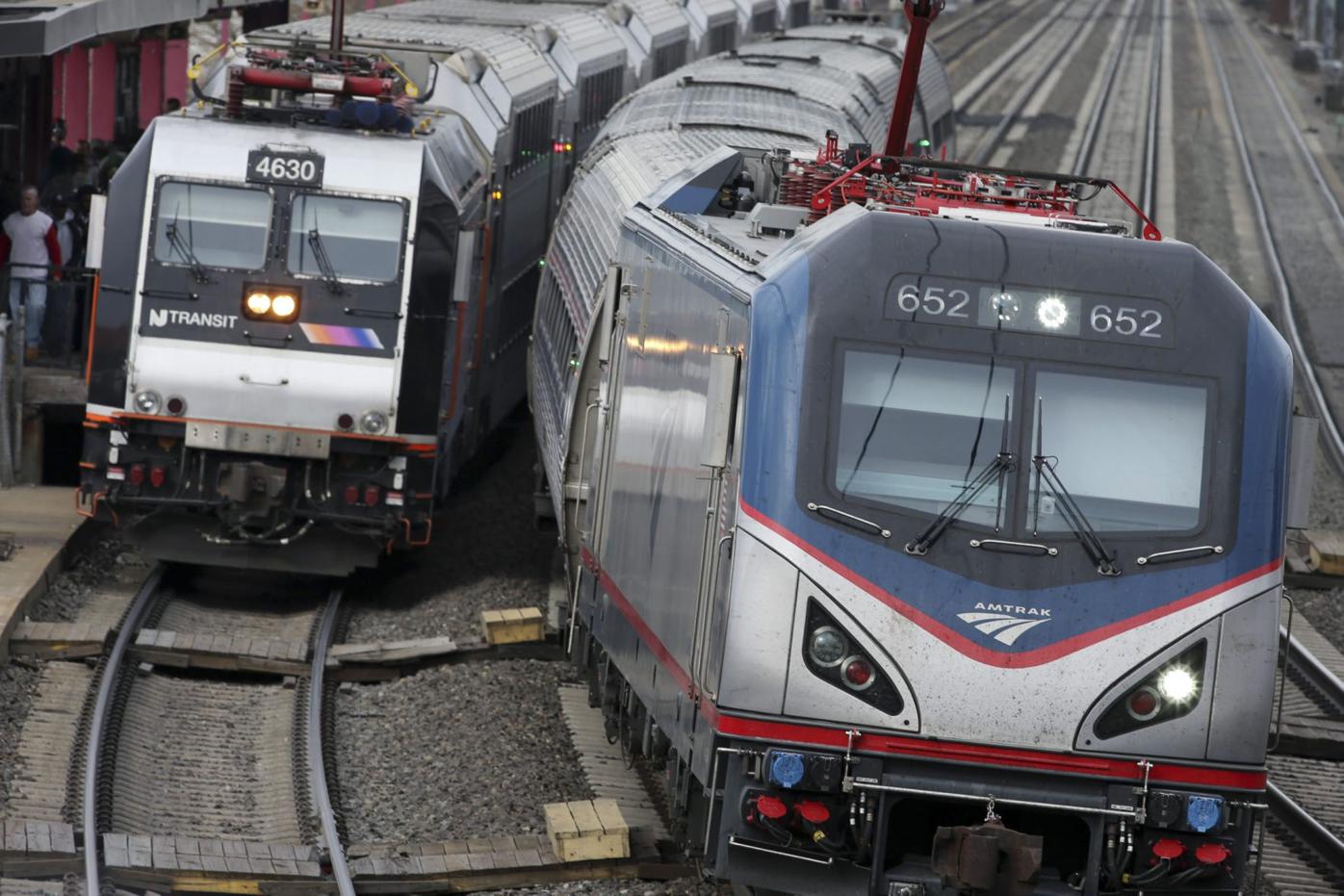 An Amtrak train passes a New Jersey Transit train stopped to discharge and board passengers in Elizabeth, N.J. Federal regulators recently endorsed a plan to rebuild the congested Northeast Corridor over the next 30 years by shoring up crumbling infrastructure, running more trains and building new tracks that would allow speeds of up to 220 mph.

The view below the Interstate 84 twin bridges in Dunmore.

A tractor-trailer travels east on Interstate 78 in April in the Lehigh Valley area.

PennDOT has started replacing the Interstate 84 twin bridges in Dunmore.

An Amtrak train passes a New Jersey Transit train stopped to discharge and board passengers in Elizabeth, N.J. Federal regulators recently endorsed a plan to rebuild the congested Northeast Corridor over the next 30 years by shoring up crumbling infrastructure, running more trains and building new tracks that would allow speeds of up to 220 mph.

Damaged roads and structurally deficient bridges not only are a safety hazard. They add extra expense for everybody who drives on the region’s roads.

Damage to vehicles is especially costly for businesses.

Improved infrastructure would reduce vehicle maintenance costs for businesses. It also would help the United States compete with other countries, such as China, said U.S. Rep. Matt Cartwright, D-8 of Moosic, who supports President Joe Biden’s more than $2 trillion American Jobs Plan to repair roads, bridges and other infrastructure and increase broadband availability.

“Where it affects us is in maintenance costs on the vehicles,” said Larry Catanzaro, vice president of transportation for Kane Logistics, Scranton. “All the potholes and rough roads are really hard on the trailers. It’s expensive to maintain vehicles. You’re cutting up tires, you’re beating up suspensions.”

He said that though he doesn’t track the specific costs of repairs, he knows what makes repairs necessary.

“It is ridiculous,” Catanzaro said. “The highways at this point are not bad, but the roads in towns are definitely horrible.”

He said the road conditions don’t affect the company’s delivery schedules, but the damage they cause affects utilization of the company vehicles.

Catanzaro also cited a new American Road and Transportation Builders Association report that states Pennsylvania has the second highest number of structurally deficient bridges in the country, with 3,353 — or 14.6 percent — of its bridges requiring work. Structurally deficient means one of the key elements is in poor or worse condition.

The report is based on data from the Federal Highway Administration 2015 National Bridge Inventory, reported on March 11, 2021. According to the report, the data is created locally and compiled by FHWA, which means the status of some bridges may have changed since the inspection referenced in the report.

Pennsylvania Department of Transportation Press Secretary Alexis Campbell said the number of deficient bridges in Pennsylvania has been reduced to about 2,500 bridges, down from more than 6,000 in 2008.

“Just because a bridge is in poor condition doesn’t necessarily mean it is unsafe,” Campbell added. “It just needs attention.”

“We currently have $9.3 billion in unmet needs across our state-maintained system alone, plus the needs of our local systems,” Campbell said. “Because there hasn’t been a significant increase in federal investment, we’ve been forced to redirect more state funds away from regional projects to the interstate network.”

Iowa has the most structurally deficient bridges out of any state with 4,571, or 19.1 percent, of its total bridges.

More than 220,000 — 36 percent — of bridges across the country need repair work, according to the ARTBA report.

“You want to repair the transportation system because that is how businesses get their product to market,” said Cartwright, who will have input on the bill as a member of the House Appropriations Committee and chairman of the Appropriations Subcommittee for Commerce, Justice and Science.

Among the proposals in Biden’s plan is improving broadband to provide internet service in rural areas. But improved broadband will help business, as well.

“What we’ve seen from the pandemic is the influx of people from New York City to lower Monroe County,” Cartwright said. “They figured out they could work anywhere.”

He said those workers also would add to demand for the Scranton-to-New York City passenger rail service, a pet project of Cartwright’s.

In addition to repairing highways, rebuilding bridges and upgrading ports, airports and transit systems, the American Jobs Plan proposes to deliver clean drinking water, a renewed electric grid and high-speed broadband to all Americans and eliminate all lead pipes and service lines in drinking water systems. It proposes to put hundreds of thousands of people to work laying thousands of miles of transmission lines and capping hundreds of thousands of orphan oil and gas wells and abandoned mines.

The bill still must make it through Congress, where Republicans are pushing back against the proposal they feel is too broad.

Cartwright said the internet is a part of modern infrastructure rural areas just can’t get.

The congressman said the plan would help the country compete with China.

“China is rebuilding,” he said, adding that “270 Chinese cities have a million people. They all want to compete with us, they all are building bullet trains.”

Biden would pay for his proposal by raising the corporate tax back to 28 percent from its current 21 percent.

Cartwright said the plan would include upgrading sewer and water lines.

“You can’t let that stuff go,” he said. “Look what happened in Flint, Michigan. It’s not safe and not the responsible, grownup, adult thing to do.”

Campbell said the legislation would provide funding for much-needed projects, money the state doesn’t have.

“We’re obviously really excited about the plan,” Campbell said, adding, though, state officials don’t know how the funds would be coming to Pennsylvania or how they would be distributed — either in a grant or through a formula.

She said PennDOT has projects planned in its four-year and 12-year plans.

“Any federal dollars would help our dollars go further,” she said. “We could add projects. Interstate highways are the priority.”

Campbell said the state’s federal transportation allocation hasn’t increased since the 1990s, so the state has lost buying power.