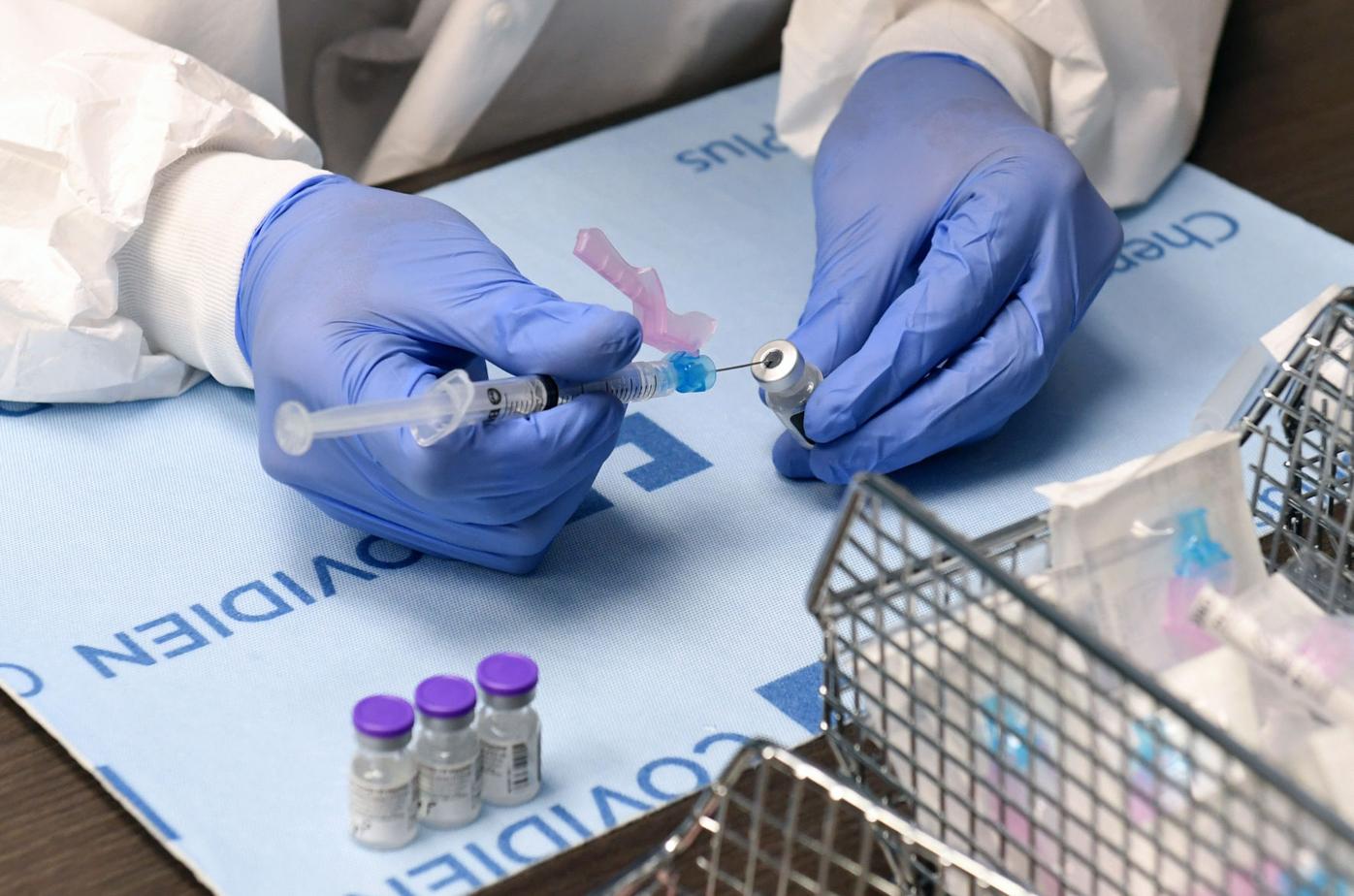 A COVID-19 vaccine, which is being given out locally to health care workers and at nursing homes. 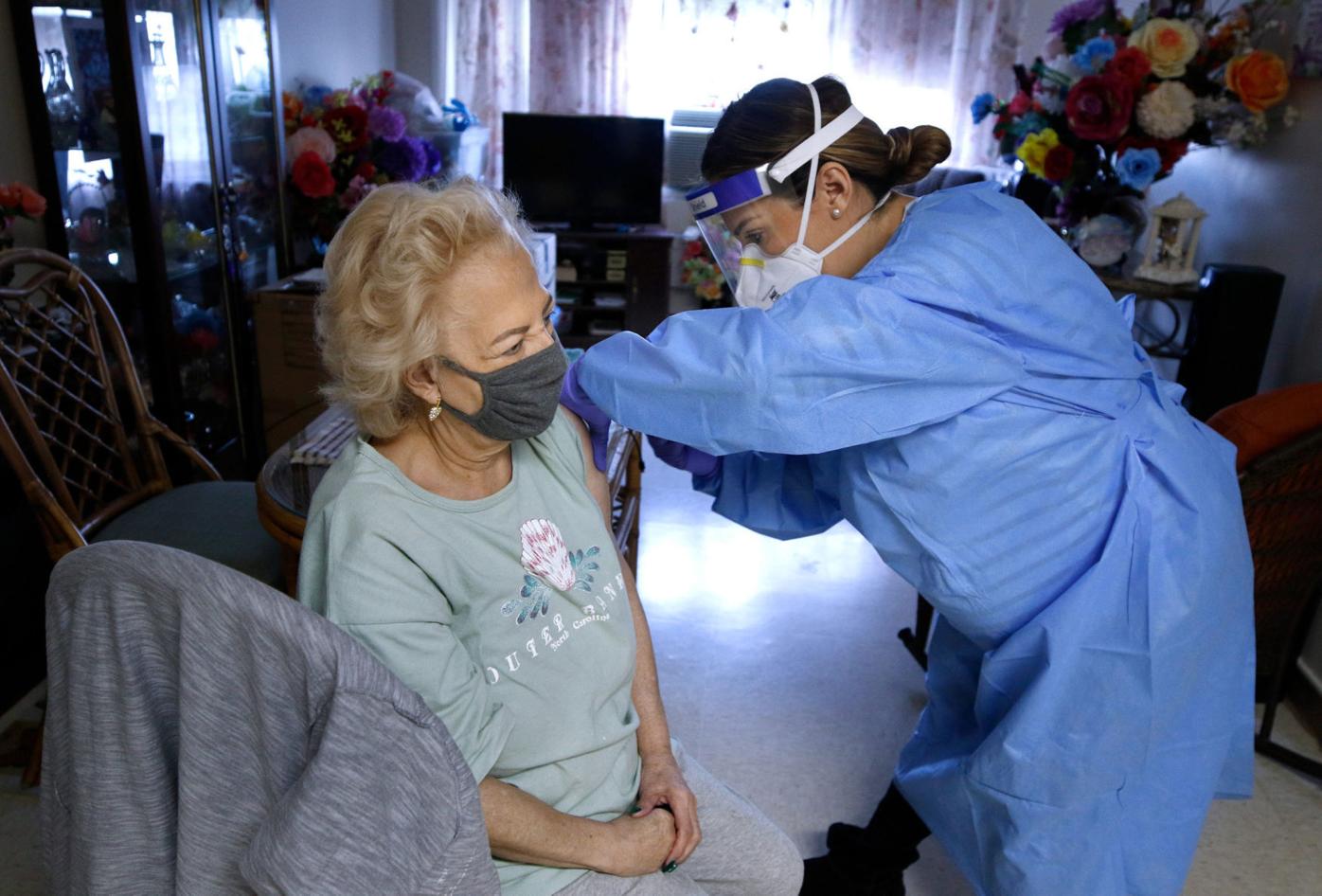 Health workers and nursing home residents get to line up first to get a COVID-19 vaccine. State and federal regulators have been less clear about who gets it next.

A COVID-19 vaccine, which is being given out locally to health care workers and at nursing homes.

Health workers and nursing home residents get to line up first to get a COVID-19 vaccine. State and federal regulators have been less clear about who gets it next.

In the waiting game for a coronavirus vaccine, health workers and nursing home residents get to line up first.

State and federal regulators have been less clear about who gets it next.

Since the beginning of the pandemic’s story in Pennsylvania, certain sectors have been deemed essential and allowed to stay open. Distribution, manufacturing, food processing and supermarkets were allowed to stay open. Many split up shifts and stepped up cleaning routines, but they never fully shut down because, without them, the supply chain comes to a grinding halt.

Those sectors could also get earlier access to a vaccine compared to, say, the teleworking labor force.

It’s too early for Eric Esoda, president and chief executive officer of the Northeastern Pennsylvania Industrial Resource Center, or NEPIRC, to make any recommendations for manufacturers, or any business for that matter, while his team seeks answers on how to manage worker populations who are vaccinated and those who aren’t.

Even as COVID-19’s national death count soars over 300,000, state health regulators say they will not mandate vaccinations.

In a limited survey, The NEPA Business Journal found business leaders in the region won’t either. That means they’ll have to manage two separate groups of worker populations – those who get the vaccine and those who do not.

“Regardless of how it’s rolled out, it’s not really reasonable to assume they’re going to get everyone at once,” Esoda said.

NEPIRC supports the manufacturing sector in 11 Northeast Pennsylvania counties. Esoda’s been working with a legal team and regulators to determine what the balancing act looks like.

One thing seems clear: stiff safety measures that became standard protocol pre-vaccine will undoubtedly remain in place well into the new year. Given the speed with which the vaccine was produced, scientists never fully tested whether a vaccinated person could still carry the coronavirus, which makes managing teams tricky business.

“You could be vaccinated, but you could still also be carrying the virus and spreading it,” Esoda said.

An interim phased plan from the state Health Department, which draws directly from a plan by the federal Advisory Committee for Immunization Practices, suggests that workers who must be on site, for example factory and food service employees, should be prioritized. The federal plan also leaves the task of defining sub-categories of essential workers up to individual jurisdictions.

A full team of vaccinated employees would certainly make work easier at Northeastern Plastics Inc. and JED Pool Tools in Scranton, said President Cindi Telesca Heyen. The family businesses, with about 50 employees, makes premium tools for swimming pools and also offers custom injection molding for the plastics industry. Their most famous product is probably the novel little green army women, which were designed by Scranton toymaker Jeff Imel and gained national acclaim in 2019.

COVID-19 has strained hiring and working conditions while technicians have had to wear masks in a naturally warm working environment. Still, Telesca Heyen stopped short of saying she would mandate that workers get the vaccine.

“I wouldn’t just from a freedom standpoint … I would respect that,” she said, adding that she might if the government required it, like public schools require students to get standard vaccines, but “I wouldn’t be the first to say, ‘You have to have this.’”

Executives in other sectors are thinking this way, too.

“At this point, it’s too soon to make that recommendation until we find out the effectiveness of this and side effects,” said Jerry Fives, who owns nine Dunkin’ restaurants in the region.

Fives follows the Dunkin’ playbook for infection mitigation, and was among the first this spring to implement extra measures, such as plexiglass barriers at the point of sale, in his restaurants. He had them installed long before customers were even allowed to go inside.

Hospitality has been one of the most aggressive and proactive industries to protect workers and patrons, he said, but also the one bureaucrats and lawmakers attack first when case numbers spike. His restaurants have weathered through the stiffest lockdown measures because they offer drive-through service. Many of his friends and peers, however, have not, and that angers him.

“I’m sick and tired of this industry being a political football,” he said.

At Cardinal LG, a laminated glass manufacturer with a plant in Jessup and a sister factory that makes insulating glass in Mountain Top, Plant Manager Joe Michaels also said it’s too soon to discuss anything like mandating vaccinations.

He said, however, that a spirit of honesty and open communication among workers and management have helped them keep the whole team safe.

That means workers telling supervisors right away if they’ve traveled out of state, if they feel symptoms or spent time with people who later tested positive.

“I think we at this location did a very good job of that,” he said.

Following a family get-together earlier this year, just about everyone in Telesca Heyen’s family came down with COVID-19, including her. She felt only gentle symptoms, never considering she had the disease, hopped around the plant as usual, always with a mask, always practicing social distance.

When it became clear that she probably had it, she left.

The family never pinpointed which one introduced the virus to the rest of them, but by following the rules, they kept it outside of the plant.

“Knowing my whole family got it, many of them working in the business, I think only one other person got it,” she said, adding that a vaccine will give them an added layer of comfort. “The measures do help, but it will be a relief to not be policing that.”

“Knowing my whole family got it, many of them working in the business, I think only one other person got it. The measures do help, but it will be a relief to not be policing that.”