Wayne County farmer Greg Swartz obtained a loan from the Clean Energy Co-Op in Honesdale to construct an array of solar panels on the roof of a building. The panels supply enough electricity to power his entire farm and home. 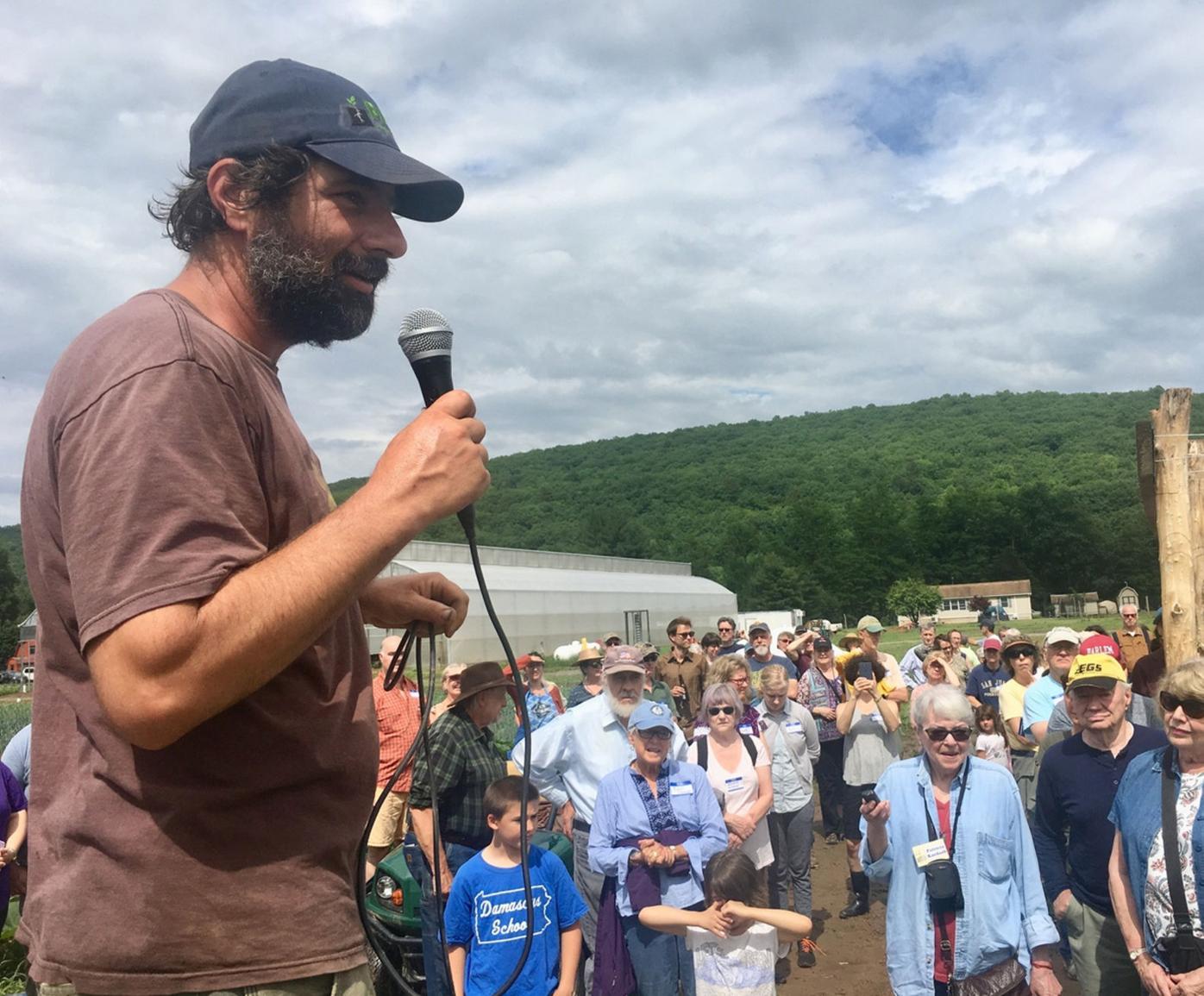 Utilizing and supporting renewable energy sources, such as solar, falls in line with what farmers already do to manage natural resources, according to Wayne County farmer Greg Swartz, pictured. 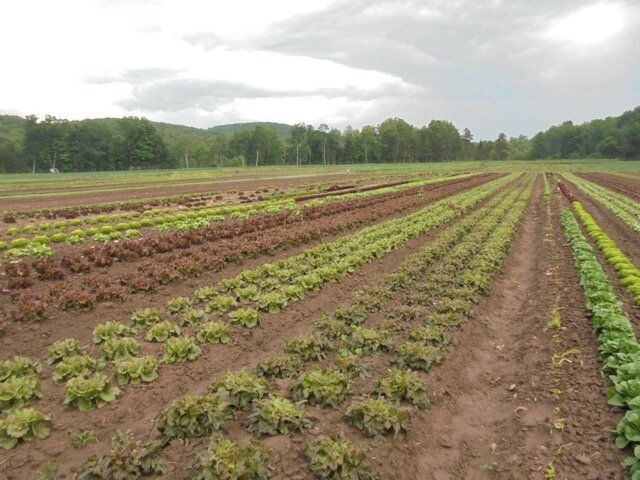 While a lease with a solar company can be financially lucrative to farmers, Dan Brockett of Penn State Extension said a dual-use option that allows some agricultural production to continue could appeal to more landowners. 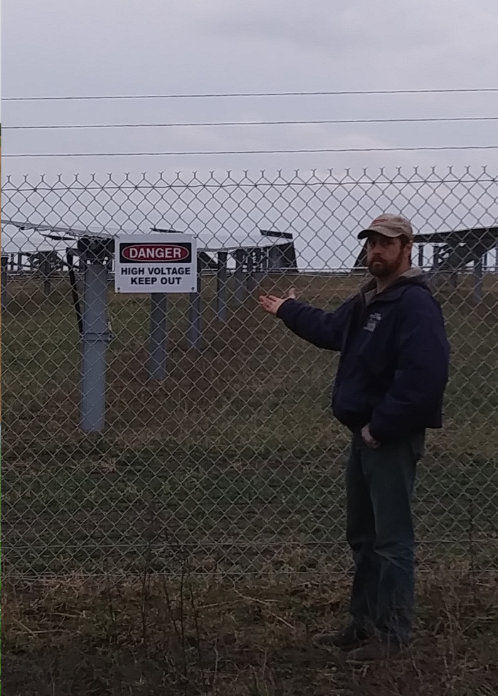 Franklin County farmer Doug Ketner stands next to a solar farm in his area. A lease with a solar company could provide a financial benefit to farmers, there are concerns about the aesthetic impact on the rural landscape.

Wayne County farmer Greg Swartz obtained a loan from the Clean Energy Co-Op in Honesdale to construct an array of solar panels on the roof of a building. The panels supply enough electricity to power his entire farm and home.

Utilizing and supporting renewable energy sources, such as solar, falls in line with what farmers already do to manage natural resources, according to Wayne County farmer Greg Swartz, pictured.

While a lease with a solar company can be financially lucrative to farmers, Dan Brockett of Penn State Extension said a dual-use option that allows some agricultural production to continue could appeal to more landowners.

Franklin County farmer Doug Ketner stands next to a solar farm in his area. A lease with a solar company could provide a financial benefit to farmers, there are concerns about the aesthetic impact on the rural landscape.

A small array of solar panels soaks up the sun on a south-facing slope on Spring Hills Farm in Dalton.

The panels generate 10 kW, enough to supply half the electrical needs on the 200-acre farm, and there could be more solar production in the near future.

Dylan Hull Zeitlyn, who operates the farm with other family members, said they’re considering adding more panels to increase capacity, and they may be interested in diving into the solar landscape on an industrial scale via a land lease with a company.

“We’re interested in helping the transition to clean energy. As a landowner, if we can be a part of it, we should be,” Zeitlyn said.

Industrial solar fields have popped up in increasing number of late, predominantly in the south-central and northwestern parts of Pennsylvania.

But there are indications the industry is ready to expand into the northeast, and if it does, farmers will be among the first landowners that solar firms aim to get their signature on a lease.

Currently, there are 364 proposed solar projects in Pennsylvania in the que for a permit from PJM Interconnection, a regional transmission organization that coordinates the movement of wholesale electricity in all or parts of 13 states and the District of Columbia.

Of those states, Pennsylvania ranks fifth in solar capacity, and some experts believed it’s poised to grow.

Dan Brockett, an energy educator with Penn State Extension, said there’s a push from the state and federal government to lower greenhouse gas emissions, and large, publicly-traded companies are eager to include renewable energy in their portfolio.

Also hastening the push to construct solar farms, Brockett added, is Pennsylvania’s Alternative Energy Portfolio Standards, which established a goal of one-half of 1% of the electricity used in the state must come from solar, expires in May 2021.

“Government policy is saying we need to do this,” he said.

Another factor that makes solar more feasible, according to Brockett, is the technology has improved and the cost has dropped. Solar panels have gotten cheaper just as the demand has soared.

In the northeast, there are 37 projects — ranging from planned to active — from six counties in PJM’s new services que. Columbia County tops the list with nine, followed by Montour and Luzerne with 8 each. Lackawanna and Wayne counties each have three projects in the que.

Still, only about 15% of the projects in the PJM que are built, and many fall by the wayside because they can’t connect with a buyer for the electrons to be produced, or they don’t’ have an investor.

“There are a lot of things that can occur,” Brockett said. “Some stall out because townships might write zoning ordinances that aren’t conducive. Chances are, most of the facilities proposed won’t be built.”

But when a solar project does move toward fruition, farmland often serves as the location.

Solar firms prefer to locate projects near high-voltage power lines or substations, Brockett said, and on farmland because the area is already cleared, the terrain is easy to work with and, as a result, money is saved up front.

Finding a suitable location is only half the battle, however, for solar companies. In some cases, it’s not easy to convince landowners to sign a lease, which can range from 25 to 50 years.

“I’m finding a real mixed bag of how people who are approached for leases are reacting,” Brockett said. “Some farmers see $1,200 an acre, per year to lease, and there’s no crop that can make that kind of money. Others are saying no one is making any more land, I worked hard to get this and I’m not giving any of it up to a solar developer.”

A planned solar project by Pattern Energy in Montour County that will cover 1,000 acres of land owned by Talen Energy has caught the attention of nearby farmers.

According to Jenn Ritchey, director of development at Pattern Energy, her company has received a lot of interest from farmers in the area who would like to integrate solar projects into their operations.

“Solar energy can coincide with crop and animal agriculture. Solar is a drought resistant crop that farmers can choose to install for income stability for their family and to support later generations” Ritchey said.

The Montour County solar project has a lifespan of approximately 35 years, Ritchey added, and after that the panels will be decommissioned and removing, allowing the land to return to its prior state.

In order for the relationship between solar and agriculture to work, Zeitlyn said it all comes down to location and use.

Covering a farm field with solar panels could take an enormous amount of land out of food production, he said, so it would be best to locate a facility on marginal or fallow land.

Allowing for a dual land use would also make a solar lease much more palatable to a farmer, Zeitlyn added.

“It would be beneficial if grazing animals, such as sheep, could be allowed in with the solar panels, preserving some of the agricultural production of the land,” he said. “We have sheep, and maybe we would double the size of our herd and graze them on solar land.”

The dual-use concept has worked well elsewhere, Brockett said, and it’s an aspect that could give farmers a second revenue source in addition to the money gained from a lease agreement.

Most solar facilities are surrounded by a chain link fence and companies pay to have the grass cut around the panels.

But there are examples of farmers using sheep to graze and maintain the property, and sometimes it’s possible to plant row crops, such as soybeans between the rows of panels.

“These are things that need to be worked out before signing a contract,” he said. “No one should volunteer to graze sheep under panels. The developer should pay for that because it’s maintaining the vegetation under the panels.”

He said there are numerous companies contacting farmers in the area about their interest in smaller solar installations on their properties, and under the right conditions it could work.

“As long as it satisfies the dual-use concept, or happens on marginal farmland,” Swartz said. “I would like to see as many farmers as possible get their own personal solar array, and then after that consider something larger scale for whatever fits their land use.”

Zeitlyn said his family has been communicating with a solar company about the possibility of a lease but have yet to reach a decision.

While the family is supportive of renewable energy, he said, and there is an economic benefit, there are other factors to consider.

“There’s a strong feeling in our family to support transitioning to renewable energy, but is the non-appeal of a chain link fence around a field worth being part of that solution?” Zeitlyn said.

“It’s an aesthetic issue. It’s going to make a 10-acre field look more industrial than the pastoral landscape we’re used to. I don’t know what we would do.”