A proposed $111 million solar farm would generate up to 80 megawatts of renewable energy to power over 14,000 homes annually. Pictured is a similar solar farm. 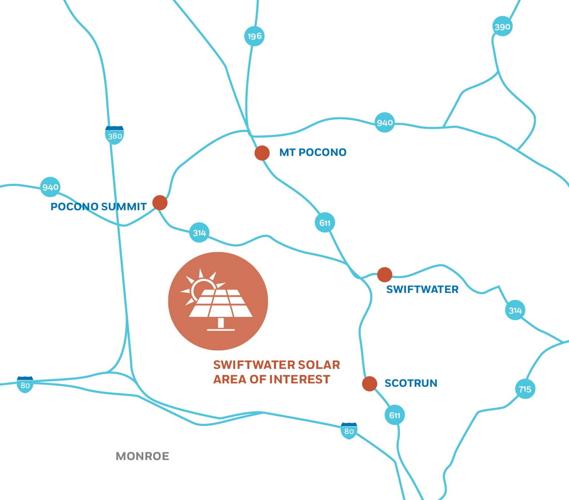 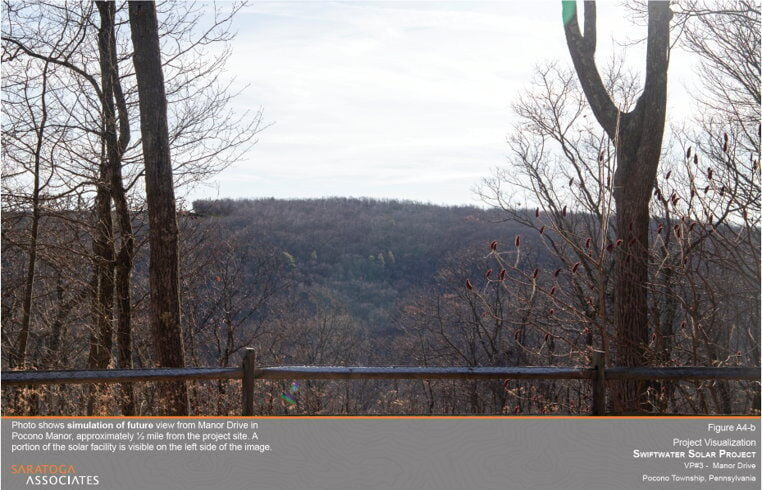 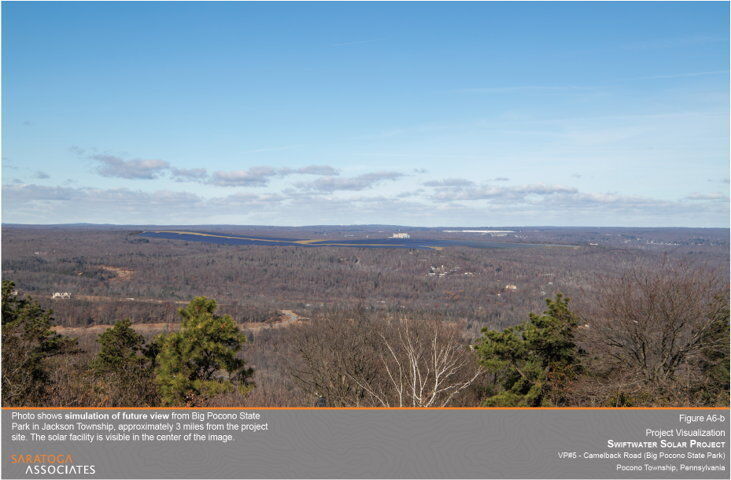 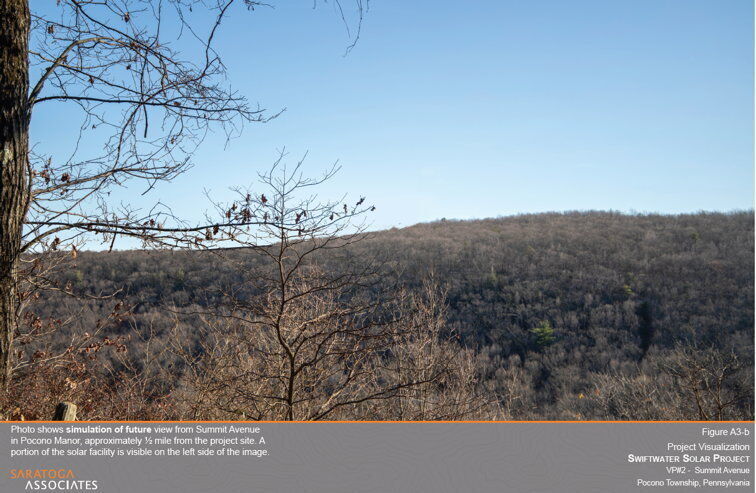 A proposed $111 million solar farm would generate up to 80 megawatts of renewable energy to power over 14,000 homes annually. Pictured is a similar solar farm.

POCONO TWP. — The future of the state’s largest proposed solar farm is clouded by an appeal.

The nine-page appeal, filed by Citizens for Pennsylvania’s Future and the Brodhead Watershed Association, against Virginia-based Apex Clean Energy’s proposed 635-acre Swiftwater Solar, a 180,000 solar panel farm on the top of Bear Mountain in Monroe County, will temporarily halt a permit by the Pennsylvania Department of Environmental Protection.

The appeal, filed on Aug 15, is based on concerns about erosion, sediment, and increased stormwater runoff on waterways such as Swiftwater Creek, Dry Sawmill Run, and Scot Run. The appeal halted the solar farm’s planned progress.

“It is in the very early stages, but PennFuture and the Brodhead Water Association are confident in our appeal,” said Emma Bast, staff attorney for Citizens for Pennsylvania’s Future.

“It is difficult to set a timeline because there are many variables at play, but the time scale of these cases tends to be over a period of months,” Bast said. “PennFuture and BWA hope to keep the process moving forward so our members and folks who use and love the creeks will have a resolution and confidence that their streams are protected.”

“The permit sets several conditions, such as the developer establishing control of erosion and sediment runoff from construction activities, managing post-construction stormwater volume, rate, and quality, and stabilizing the soil and discharge stormwater from the site,” Connolly said.

The appeal voices concerns that Pennsylvania rated Swiftwater Creek as an exceptional values stream and Dry Sawmill Run and Scot Run as high-quality would be degraded by lower water quality due to post-construction runoff.

The waterway rankings are based on “scientific testing and standards that include several factors, including various chemical presence and levels, and biological indicators, which include aquatic life,” Bast said.

“Exceptional values waters, or EV, support both wildlife and the opportunities that come with it, such as the outstanding trout fishing that the Poconos are known for,” Bast said.

Bast added that 2 % of Pennsylvania’s streams are classified as EV, of which 80% are located in the Pocono region, primarily in Monroe, Pike, and Wayne counties.

The appeal alleges Swiftwater Solar failed to demonstrate its proposed erosion and sediment plan and post-construction stormwater management for storm events, including a two-year 24-hour storm.

However, Swiftwater Solar’s National Pollutant Discharge Elimination System permit states the bulk of stormwater runoff mitigation involves a series of stormwater basins designed to handle up to a 100-year storm and located throughout the project site, Chilton said in an email.

“The ways these basins work is by creating large collection areas or basins for the rain,” he said. “The water slowly drains out via infiltration at the bottom of the structure in a way not to exceed how runoff would behave if there were no disturbance in the area.”

Chilton said Pennsylvania has some of the strongest environmental regulations in the country.

“Solar projects tend to have a minimal impact on wildlife, and most wildlife adjusts to the existence of a project very quickly,” Chilton said.

The proposed $111 million solar farm would generate up to 80 megawatts of renewable energy to power over 14,000 homes annually. According to Swiftwater’s interconnection agreement, the energy would enter the grid, Chilton said.

Taylor Munoz, Pocono Township manager, said the electricity generated would go into the grid and be available for purchase by larger companies as part of their energy portfolio.

The site’s proximity to the existing power lines means a good portion of the area “has long been clear cut and maintained with no trees or stormwater runoff mitigation,” Chilton said.

“The property does include wetlands and steep slopes,” Munoz said. “All environmental concerns were vetted as part of the land development process by the (Pocono) Township’s engineer, the Monroe County Conservations District, and the Pennsylvania Department of Environmental Protection.”

“Swiftwater Solar will create about $195,000 in annual tax revenue that will be split between Monroe County, Pocono Township, and the Pocono Mountain School District over the next 30 years,” Chilton said.

Munoz said Pocono Township would receive “a small property tax from the finished project and open space fees, which will be re-invested into local parks and recreation opportunities.”

The proposed project would create about 254-full time jobs during construction, Chilton said, adding it is a priority to ensure that local firms and individuals fill the positions.

“Swiftwater Solar will largely go unnoticed by most people who live near it,” Chilton said. “The panels will be very hard to see unless you are top of Big Pocono looking down at it.”

“Solar projects are the neighbor you do not notice,” he said.