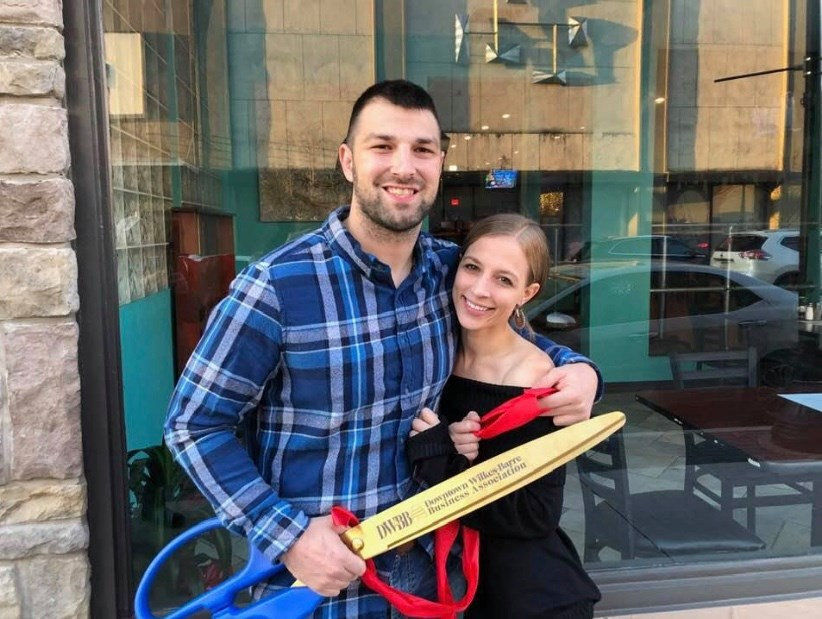 The Down Pour owners Josh and Kaylee Popple stand outside the eatery on South Main Street in Wilkes-Barre. 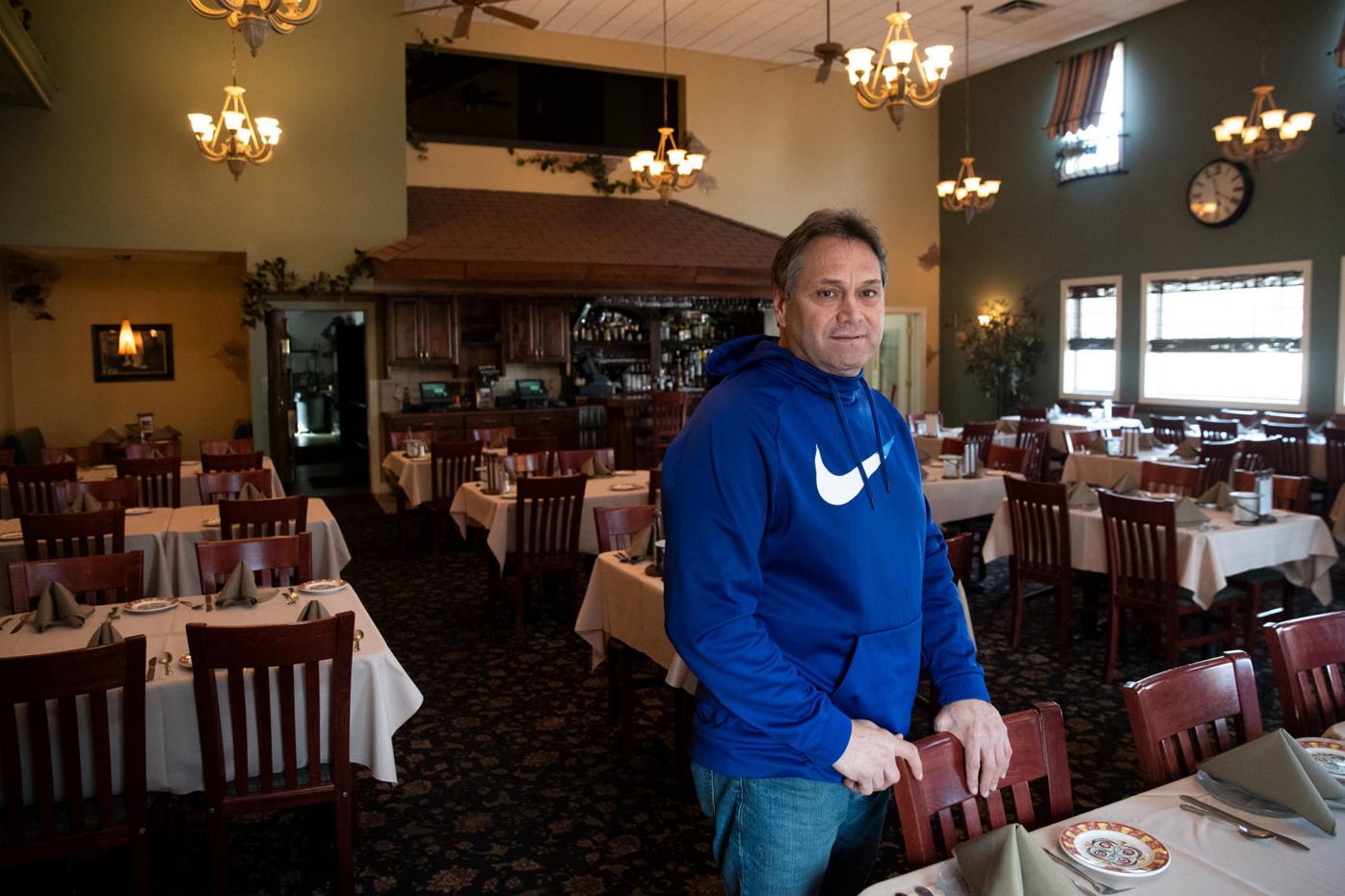 Anthony Rossi, owner of Rossi’s Ristorante and Catering in Archbald, stands in his restaurant’s dining room. 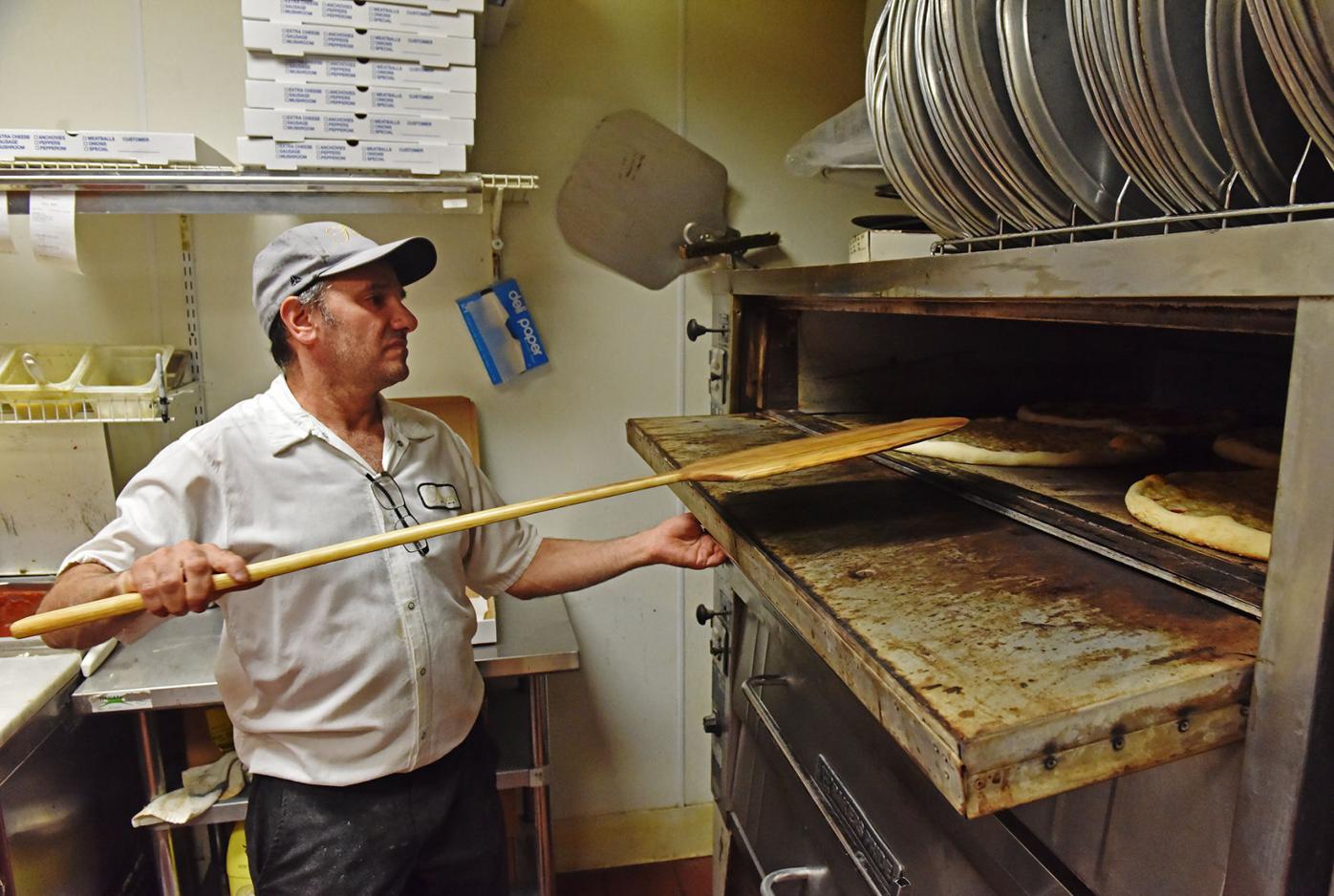 Philip Bellia checks pizzas in the oven at Franco’s Pizzeria in Wilkes-Barre during the dinner hour. 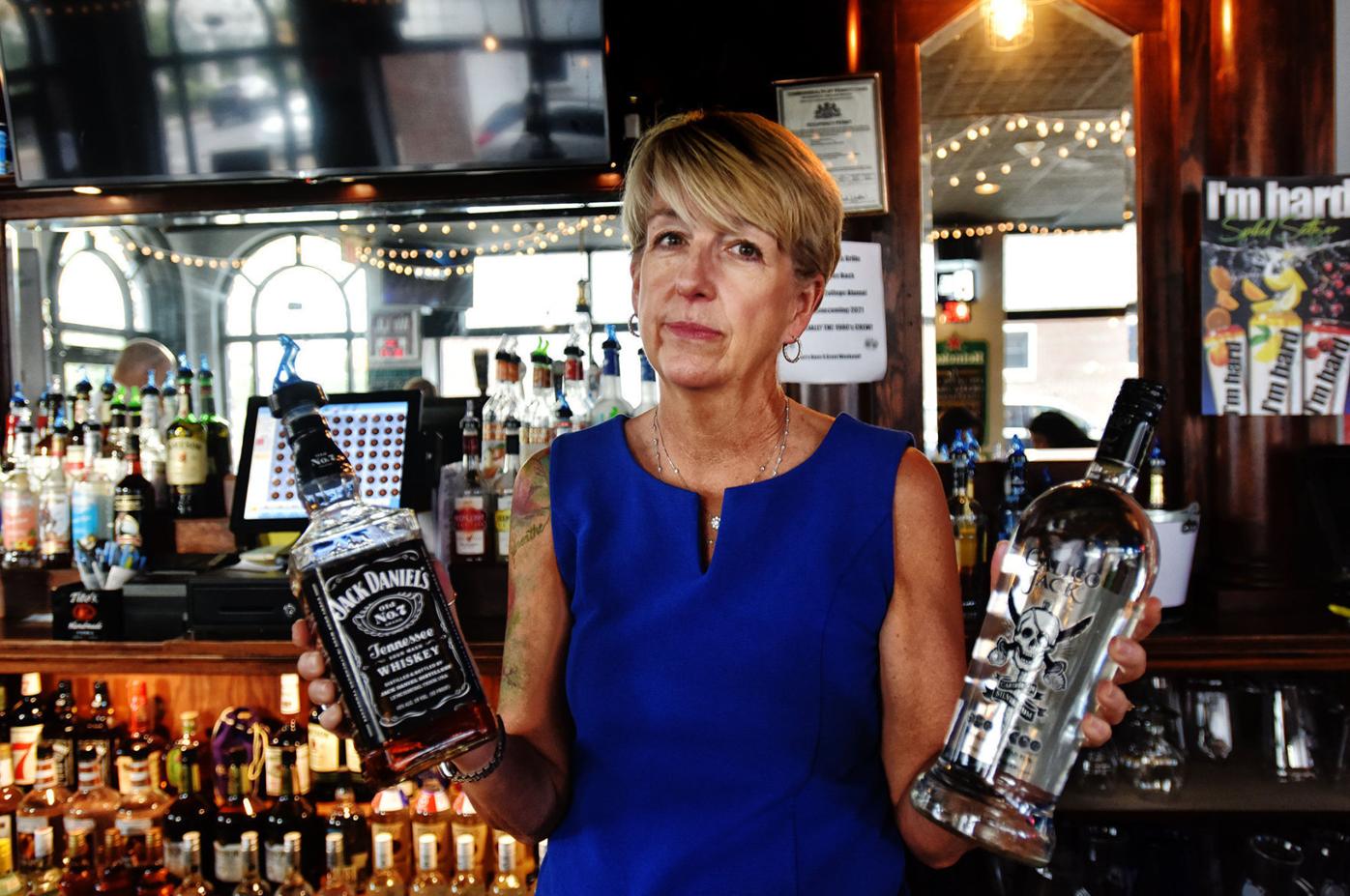 Rose Senunas, owner of Senunas' Bar and Grill, holds up bottles of Jack Daniel's whiskey and Calico Jack rum behind her bar in Wilkes-Barre. 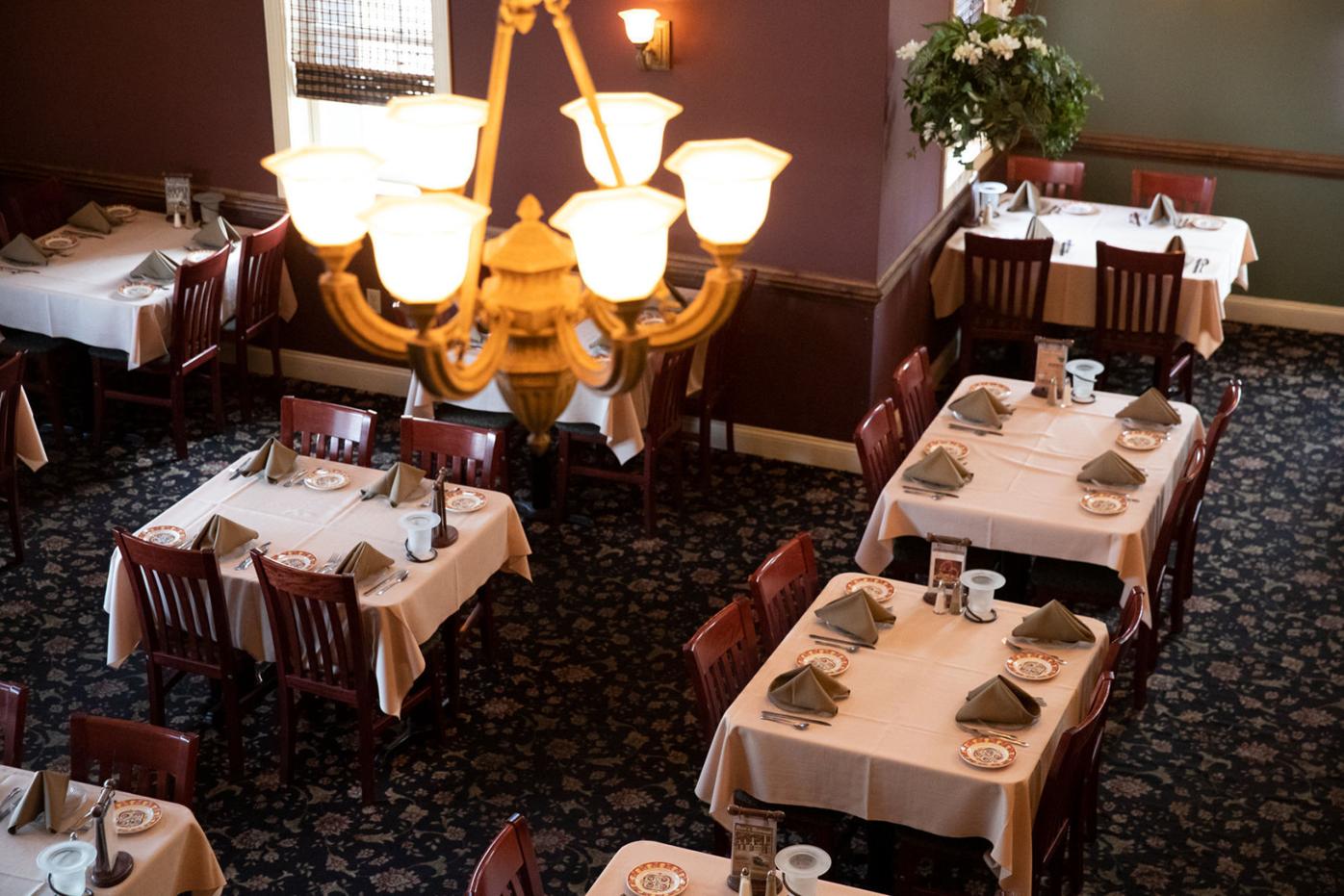 The dining room at Rossi's Ristorante and Catering in Archbald. 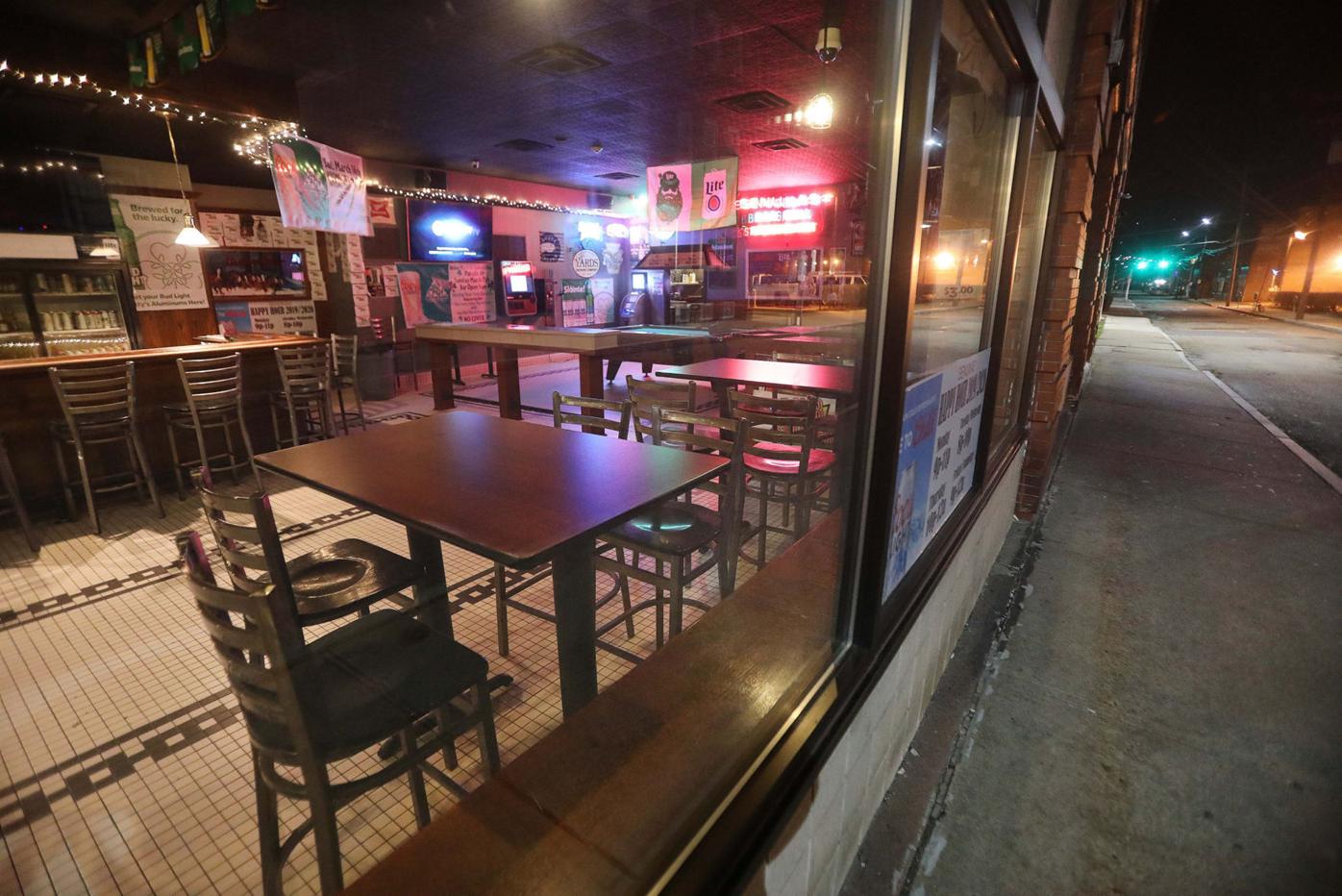 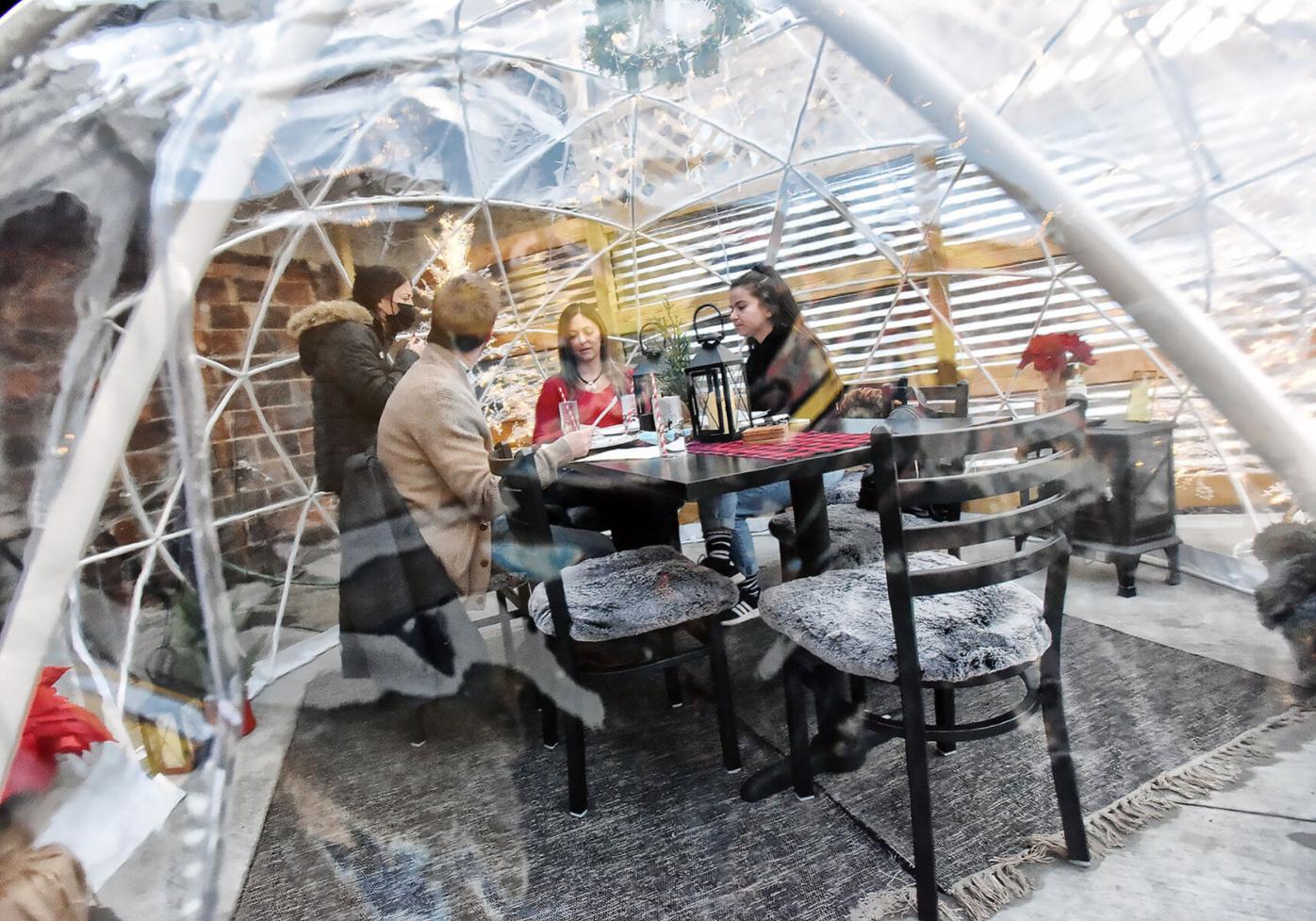 Patrons dine in an enlosure outside of the Down Pour in downtown Wilkes-Barre. 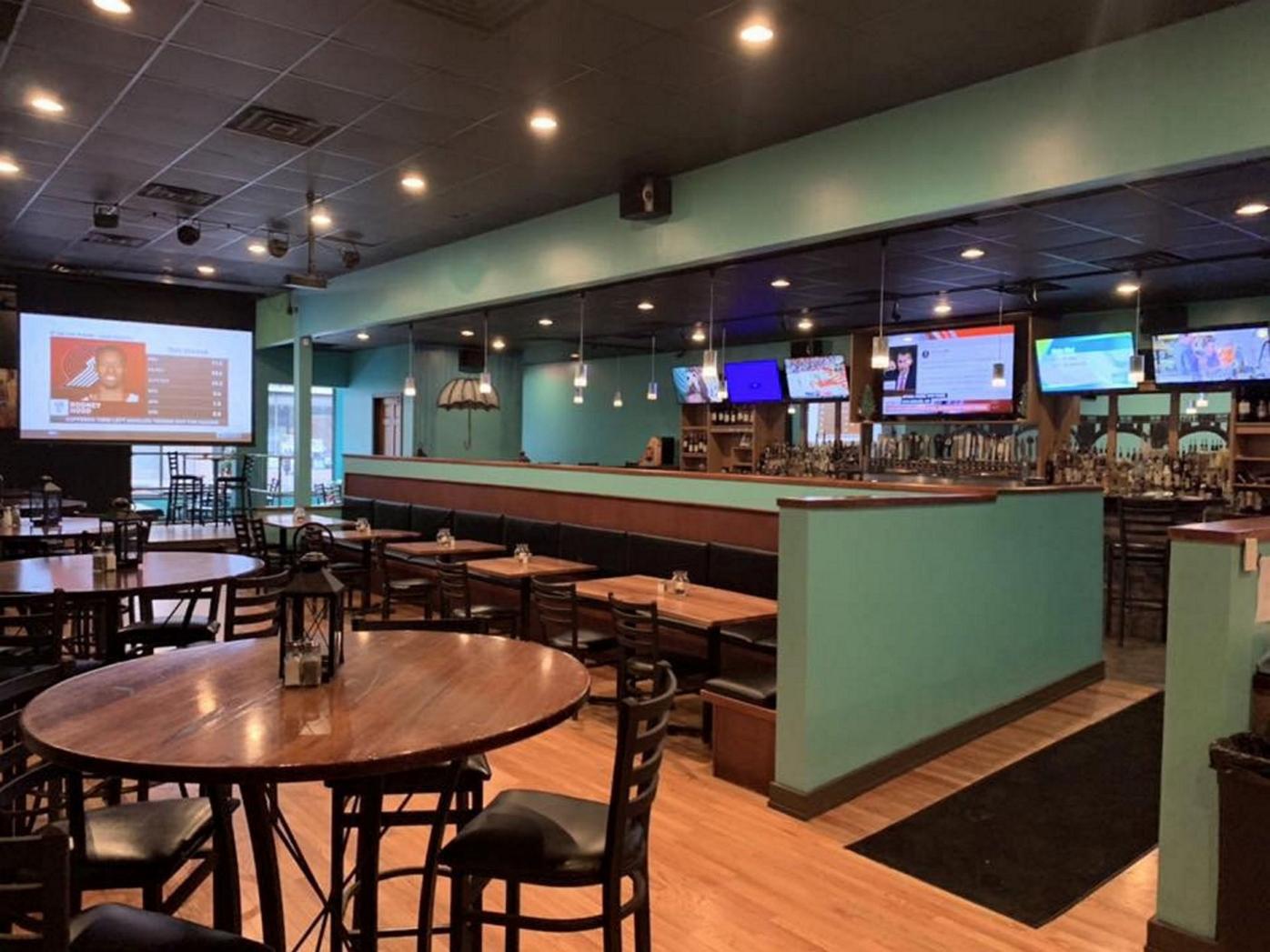 SUBMITTED PHOTO The Down Pour bar has seating at both bars with a number of booths and high top tables throughout. 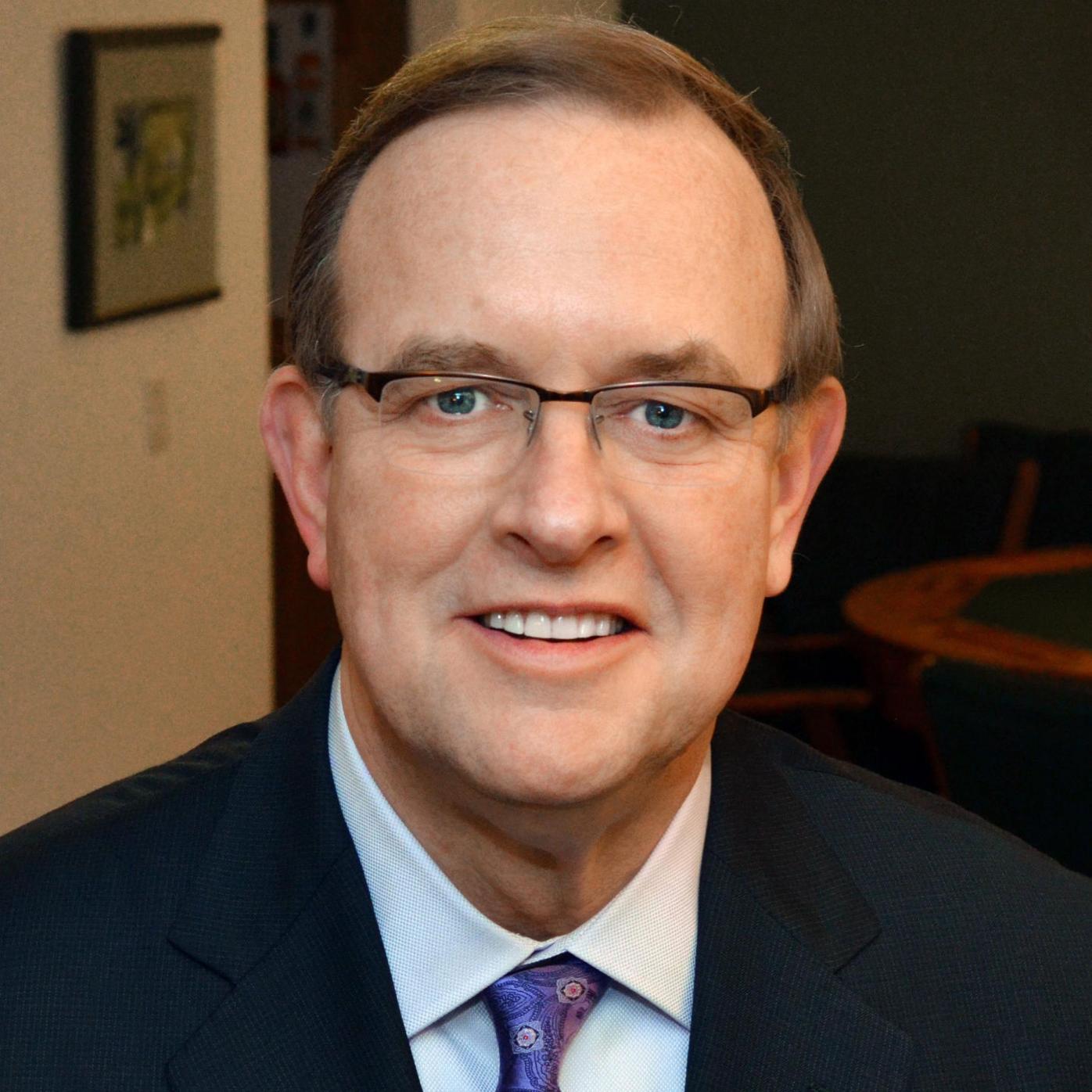 The Down Pour owners Josh and Kaylee Popple stand outside the eatery on South Main Street in Wilkes-Barre.

Anthony Rossi, owner of Rossi’s Ristorante and Catering in Archbald, stands in his restaurant’s dining room.

Philip Bellia checks pizzas in the oven at Franco’s Pizzeria in Wilkes-Barre during the dinner hour.

Rose Senunas, owner of Senunas' Bar and Grill, holds up bottles of Jack Daniel's whiskey and Calico Jack rum behind her bar in Wilkes-Barre.

The dining room at Rossi's Ristorante and Catering in Archbald.

Patrons dine in an enlosure outside of the Down Pour in downtown Wilkes-Barre.

SUBMITTED PHOTO The Down Pour bar has seating at both bars with a number of booths and high top tables throughout.

Kaylee Popple said she receives plenty of applications for openings at the Down Pour, the Wilkes-Barre restaurant/bar she and her husband, Joshua, own.

Keeping those workers is another matter.

“We had an influx of resumes,” Popple said. “It’s definitely hard to get people to stay. We’ve had trouble with people not showing up for interviews.”

The shortage of employees has forced the Popples to cut back on kitchen hours, where the shortage is more severe.

Anthony Rossi, owner of Rossi’s Ristorante, in Archbald, knows what it’s like to not have enough staff. He is about six to eight people short of the approximately 40 he normally employs. He has cut back on hours and increased starting pay by — depending on the position — close to 20 percent, he said.

Rose Senunas, co-owner of Senunas’ Bar and Grill, and Antonio DiFlora, co-owner of Franco’s Pizza, both in Wilkes-Barre, also are struggling finding enough help. They say people no longer want to work after collecting extra unemployment benefits during the pandemic.

These business owners, like others in the food and drink business just about everywhere, have been having difficulties finding enough employees to staff their kitchens and dining rooms since reopening after the COVID-19 lockdown last year.

Whether it’s because former and prospective employees preferred to collect extra unemployment money, which recently ended, or they found better paying jobs with benefits, the worker shortage has forced restaurant and bar owners to cut back hours or work shorthanded.

John Longstreet, president and chief executive officer of the Pennsylvania Restaurant and Lodging Association, still is hearing about worker shortages from restaurant owners around the state.

“Staffing is, without a doubt, the number one issue with them,” he said. “The general consensus is there has been a slight uptick in applications, but it’s been slight. All industries are struggling with staffing. It’s exacerbated in the restaurant industry because it takes so many employees to run a restaurant business.”

‘People used to not working’

Senunas said she can always use extra people. She runs the bar, and her husband, John, who also works as a full-time pharmacy rep, works the door on weekends. They also have enlisted their adult son and daughter to help out.

“People have been so used to not working,” she said. “It’s not worth their while to work.”

Senunas, who runs the bar, said the business needs help in the kitchen, at the bar and to work the door. She has placed ads, including on social media. The business sits across North Main Street from the King’s College campus.

She said some places are paying $17 or even $22 per hour, which hurts other businesses that can’t afford to pay that.

“We’re able to to stay open,” Senunas said. “We have friends that are not able to stay open.”

Some are open for fewer days or cut hours.

“The person who works in my kitchen gets paid extremely well,” she said. “Doormen normally get $5 an hour and a cut from bartenders. They were given a raise so to speak. I think it’s a mindset. I think anybody who’s working now wants to work and anyone who’s not is not interested.”

DiFlora, co-owner of Franco’s with Rosa Bellia, whose father, DiFlora’s uncle, started the business in 1969, said he only has about half of his normal staff — 12 people.

He has had to cut back his hours and now the business is closed on Mondays in addition to Sundays.

“I listed (openings) on Indeed,” DiFlora said. “It was a total waste of money. I’ve increased pays sporadically, but again, how can I afford to pay more when I can only do so much?”

He said he would have to raise his prices to increase pay, but he doesn’t want to drive customers away.

Meanwhile, the prices of cheese, flour, pizza boxes and other commodities have increased 54 to 68 percent, he said. Chicken wings went from $1.10 a pound to $4.20 a pound in 16 months.

He said that even with the extra unemployment benefits going away, “I don’t see how a person sits home for 12 to 16 months and is going to suddenly get up and go to work. People have gotten lazy.”

He said he can’t believe that he has not had students apply from Wilkes University, which is across South Main Street from the pizzeria.

“Usually I get a lot of kids, four to eight (apply for jobs),” DiFlora said. “Not one showed up.”

She said John’s parents started the business 62 years ago. Senunas and her husband took it over after his parents passed away.

“This is the worst we’ve ever seen it,” she said.

Meanwhile, higher pay at some restaurants has helped to lure workers.

Longstreet said the Lehigh Valley Restaurant Group, a Red Robin franchiser with 21 restaurants in Eastern Pennsylvania, including the Scranton area, has increased pay.

“This has been a great lesson in supply and demand,” Longstreet said.

He said some employers are offering employee sign-on bonuses. “In 45 years, I’ve never seen that before.”

He said another reason why restaurants are having a bigger problem hiring is that because restaurants shut down several times, unlike many other businesses.

“A lot of people left the industry,” he said.

He said restaurants have a difficult time offering health insurance because small businesses are forced into the small group market if they have fewer than 100 employees. That means paying higher rates. Longstreet said there are pending bills in Harrisburg to allow smaller restaurants to form associations with each other for better health insurance rates.

Longstreet believes staffing will continue to improve now that kids are back in school.

“Our industry is typically made up of dual working families,” he said. “The eviction moratorium ended and a lot of people haven’t been paying rent. If we can get kids back to school, all those things will combine to improve.”

Rossi, like the other restaurant owners, is hoping the situation gets better. He also hopes customers understand restaurants’ plight.

“People need to be little more patient,” he said. “We’re doing our best.”