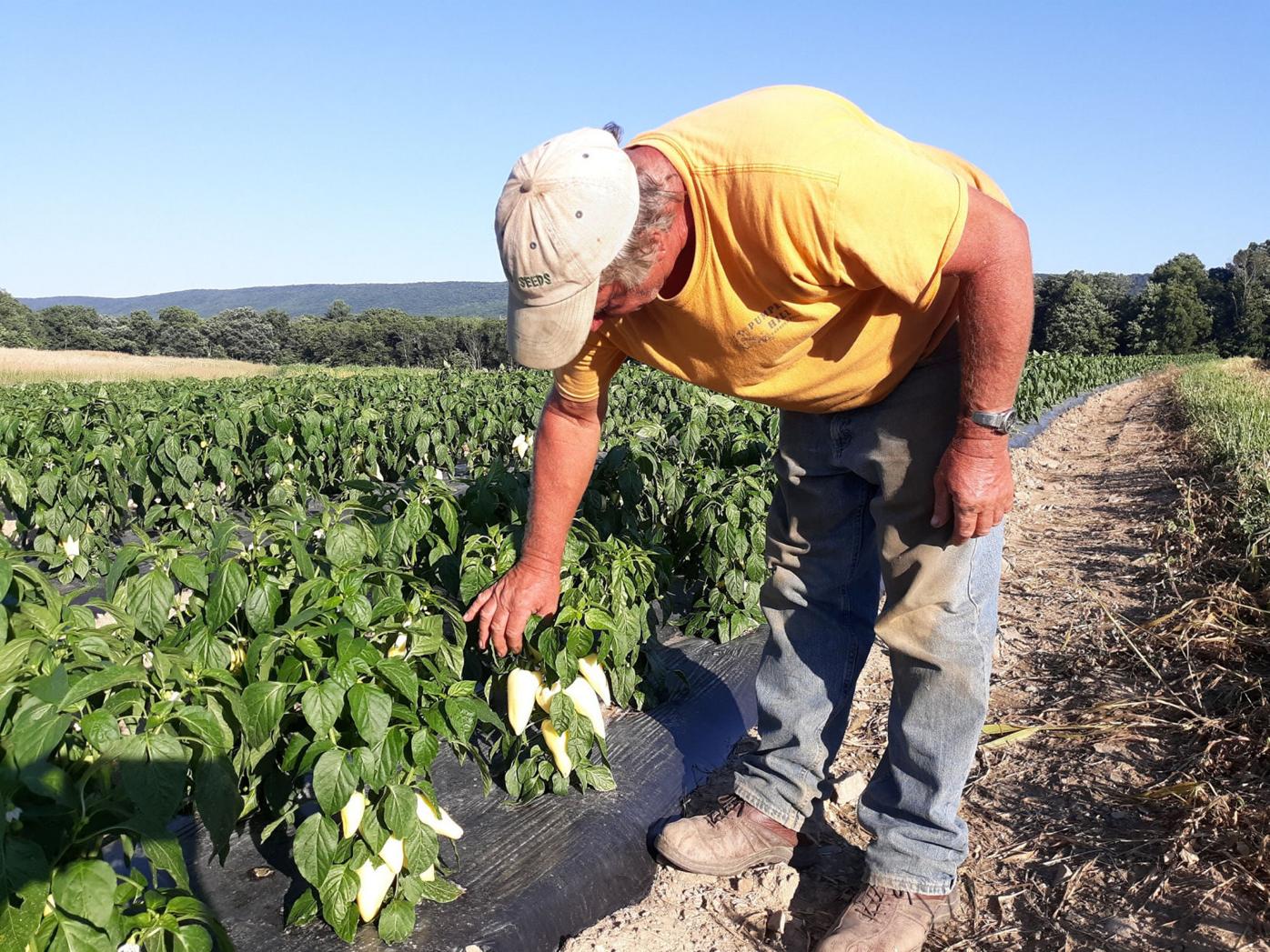 Harry Roinick inspects pepper plants on his Nescopeck Township produce farm. Roinick planted more acres of produce this spring anticipating a higher demand from customers due to the COVID-19 crisis. 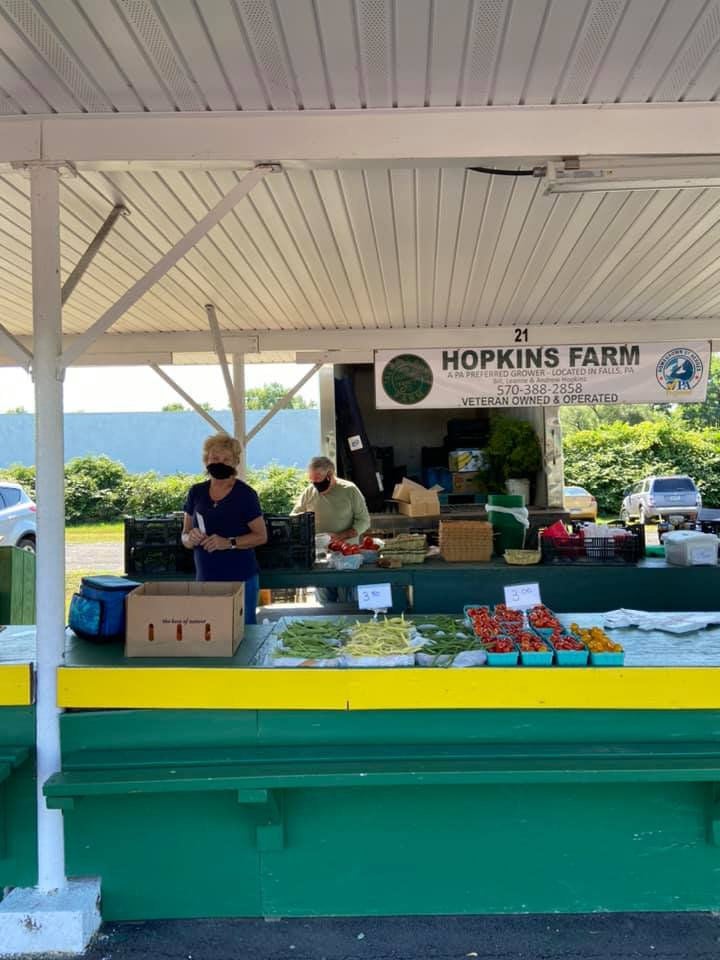 Produce farmer Bill Hopkins said business has picked up this season at both his farm and the stand he operates at the Scranton Co-op Farmers Market. If the demand continues, Hopkins is thinking about expanding his business. 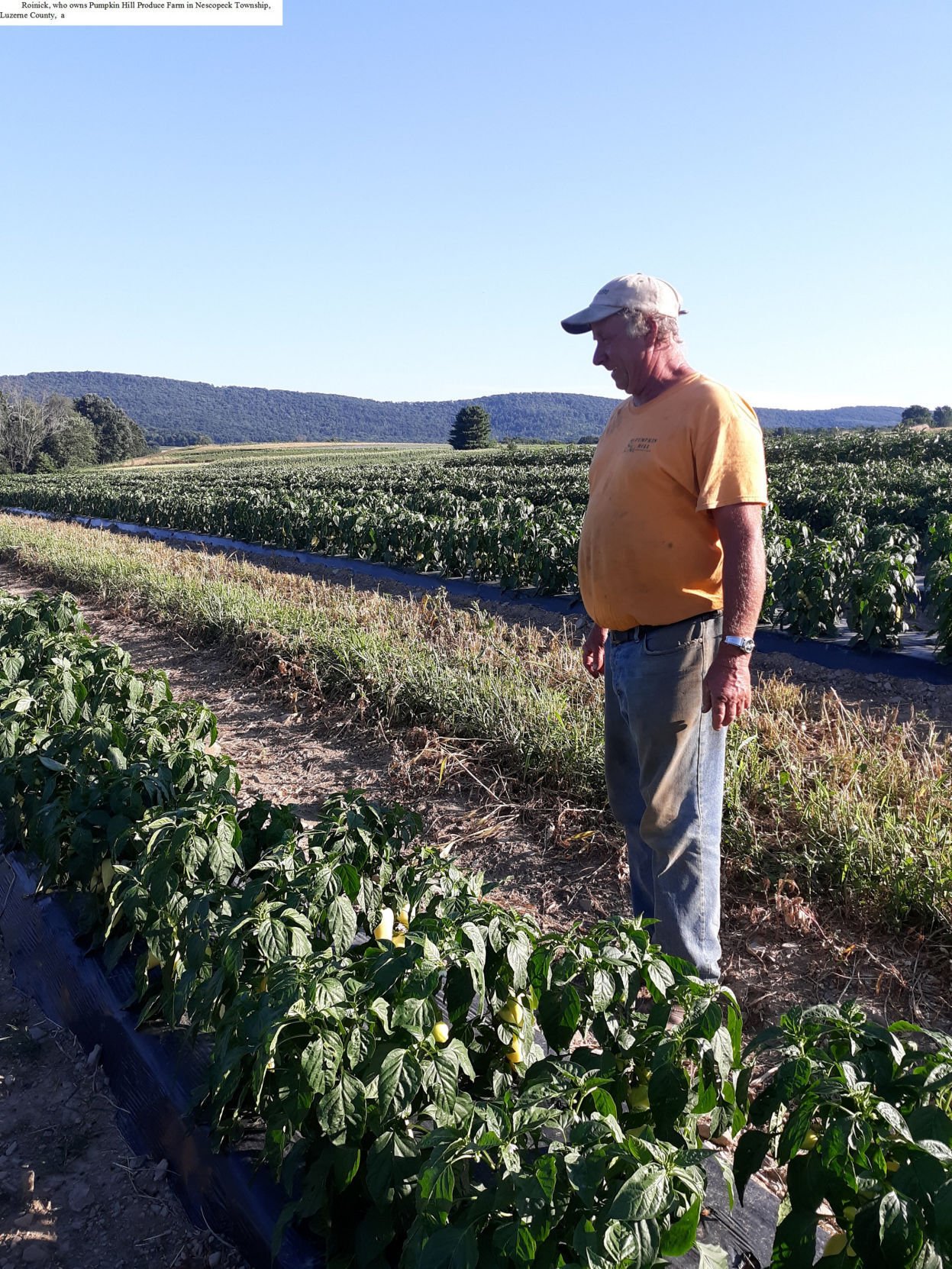 Farmer Harry Roinick said demand for produce at farm stands has been high this year, and he expects a second boost to hit once canning season arrives.

Harry Roinick inspects pepper plants on his Nescopeck Township produce farm. Roinick planted more acres of produce this spring anticipating a higher demand from customers due to the COVID-19 crisis.

Produce farmer Bill Hopkins said business has picked up this season at both his farm and the stand he operates at the Scranton Co-op Farmers Market. If the demand continues, Hopkins is thinking about expanding his business.

Farmer Harry Roinick said demand for produce at farm stands has been high this year, and he expects a second boost to hit once canning season arrives.

When the threat of COVID-19 surfaced in March, produce farmer Harry Roinick was at a crossroads.

As news of restrictions and economic shutdown began to take shape, Roinick, who owns Pumpkin Hill Produce Farm in Nescopeck Township, Luzerne County, wondered if he should change the way he does business.

“In March, I wasn’t sure if people would have the money to spend at the stand when harvest season arrived,” Roinick said. “Or, maybe they would desire local produce even more.

“I took a gamble and planted more this year, and it turned out to be the right move.”

Produce stands across the region have benefited from a significant spike in demand, and in many cases they altered their businesses as a result.

William Troxel, executive director of the Pennsylvania Vegetable Growers Association, said many farmers faced a challenge early on in how to meet the increased demand while adhering to social distancing protocols. The business was there, he said, but they had to conduct in a manner to keep customers safe.

It was a new challenge for farm stands that for decades allowed customers to flock to markets and buy right out of the bin.

“They had to change their marketing strategies and practices,” Troxel said. “When the restrictions were tight and remained in place, we saw more farms turning to online sales and delivering orders as customers pulled into the parking lot.”

For the most part, the transition to online sales was flawless. While farmers and customers missed out on the personal interaction at the stand, business still boomed and profits soared.

In fact, the online option worked so well that Troxel believes some farm stands will keep it in place even after the pandemic has passed.

“They were pushed into a sales mode that they weren’t used to, but in suburban areas they found that customers were really interested in that service. I think it would be kept as part of their business plan, in addition to selling produce the traditional way,” he said.

“It all means that it can cost more, and we’ll see if people are willing to continue to pay for that service,” Troxel said.

So far, as Pennsylvania Produce Month kicks off for the month of August, there haven’t been any issues with demand or costs on the local level.

Bill Hopkins, owner of Hopkins Farm in Falls, Wyoming County, said demand has spiked at his produce stand in Dickson City and he expects it to continue for several reasons.

Customers don’t want to deal with the uncertainty of going to a supermarket, he said, and prices are usually cheaper at a farm stand.

“We haven’t skyrocketed our prices even though our demand is higher. I’d say 95% of our prices are the same as last year, and that helps maintain the interest in supporting local farms,” Hopkins said.

Like Roinick, Hopkins also adjusted his business plan during the early stages of the COVID-19 crisis.

“We really increased how much we planted because we anticipated needing to support the local community as times got tough,” he said. “Now, we’re just entering our prime harvest season and we continue to see high demand both locally and from folks out of town. That’s a good sign.”

Ritter’s Farm Markets in Lake Ariel, Wayne County, also made an early change when they began taking produce orders over the phone and delivering them to customers in the parking lot. That option was very popular early in the pandemic, but it’s slowed down a bit in favor of traditional sales, according to Jim Ritter, who grows produce for the market.

Ritter said he also increased his sweet corn acreage this year to 30 acres in anticipation of heightened demand throughout the summer.

“I think the renewed interest will stay strong because once customers taste fresh produce, they don’t want the supermarket anymore,” Ritter said. “You work really hard to do this and the increased demand means more people are aware of what it takes to grow produce.”

One factor that continues to keep the local produce business strong as the pandemic continues, according to Roinick, is more people are interested in canning their own food. He added extra acres of sweet corn, tomatoes and peppers anticipating that more people will be canning this year.

While the canning season typically doesn’t begin until later in August, there are early indications that it could trigger a second wave of business at farm stands.

Dave Boyer, who runs the Pumpkin Hill stand while Roinick is busy in the fields, said they are getting more orders for bulk items. Kirby cucumbers – a variety popular with those who make their own pickles, have been flying off the shelf, he said.

“Last year we were putting them in the cooler until they sold. This summer, we planted more of them, bringing in four tubs a day and selling out,” Boyer said. “Not only are people buying in larger quantities, they’re also placing orders in advance of when things come in season.”

Hopkins also has a clipboard of canning season orders hanging in his market for items such as cucumbers, tomatoes, beans and red beets. That will help to sustain the business boom, Hopkins said, and he’s now considering expanding his operation in the near future.

“It’s a possibility, if that’s what it takes to keep selling our produce locally rather than shipping it out of the area,” Hopkins said.

While current demand could justify expansion plans for some farmers, Ritter is taking a cautious approach. He said customers have asked him to open markets New York and New Jersey so they don’t have to drive as far, but the labor issue is holding him back.

“You can’t open up additional markets because the labor isn’t there. Produce is seasonal, and most people want year-round employment and we can’t offer that,” Ritter said. “I’m not even sure I need to expand anyway, because right now the demand locally is staggering and I don’t see it slowing down.”