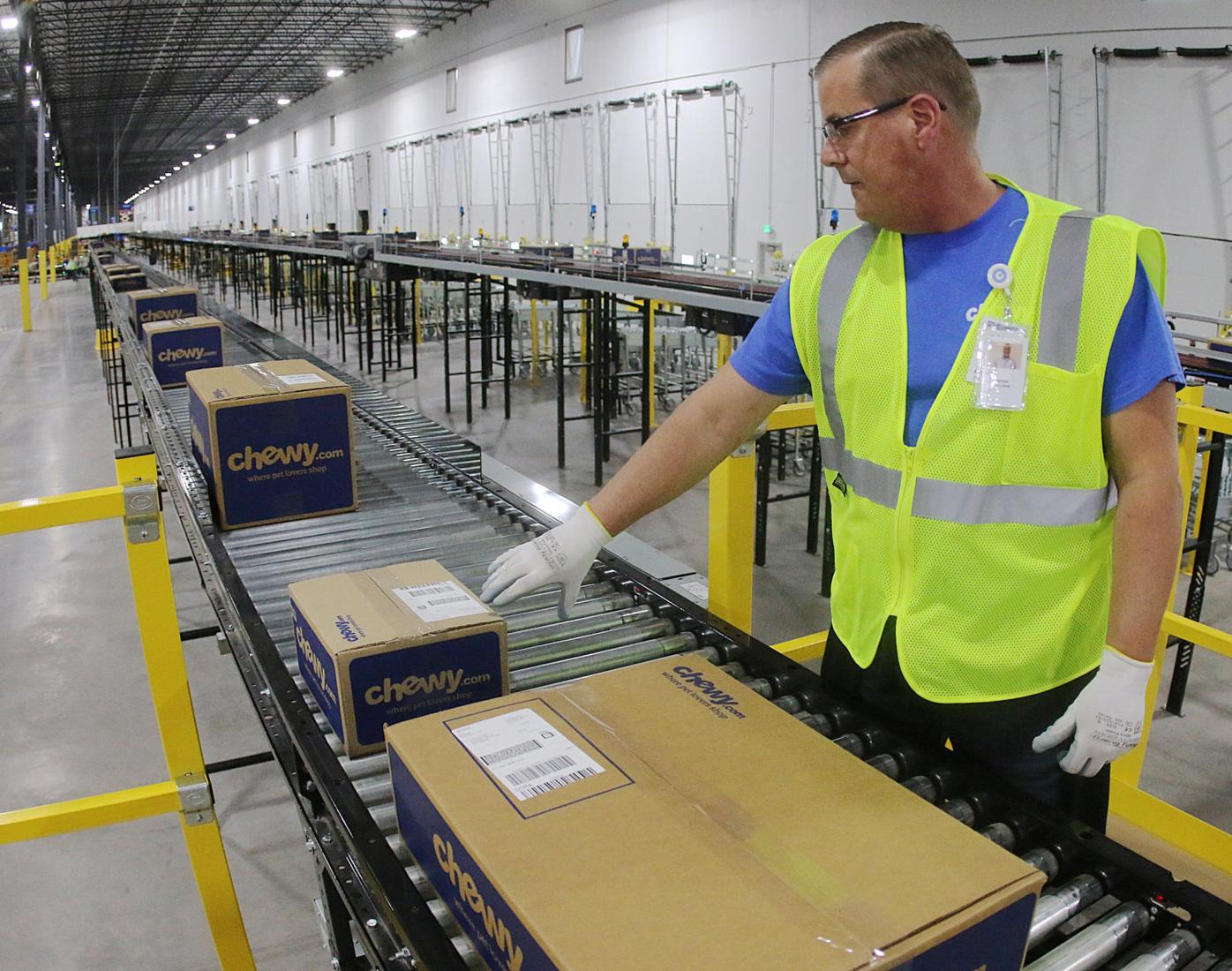 Dennis Williams of Archbald make sure boxes move along line at the Chewy.com facility in Hanover Township. Chewy, an online retailer of pet food and other pet-related products, opened an 800,000-square-foot fulfillment center. 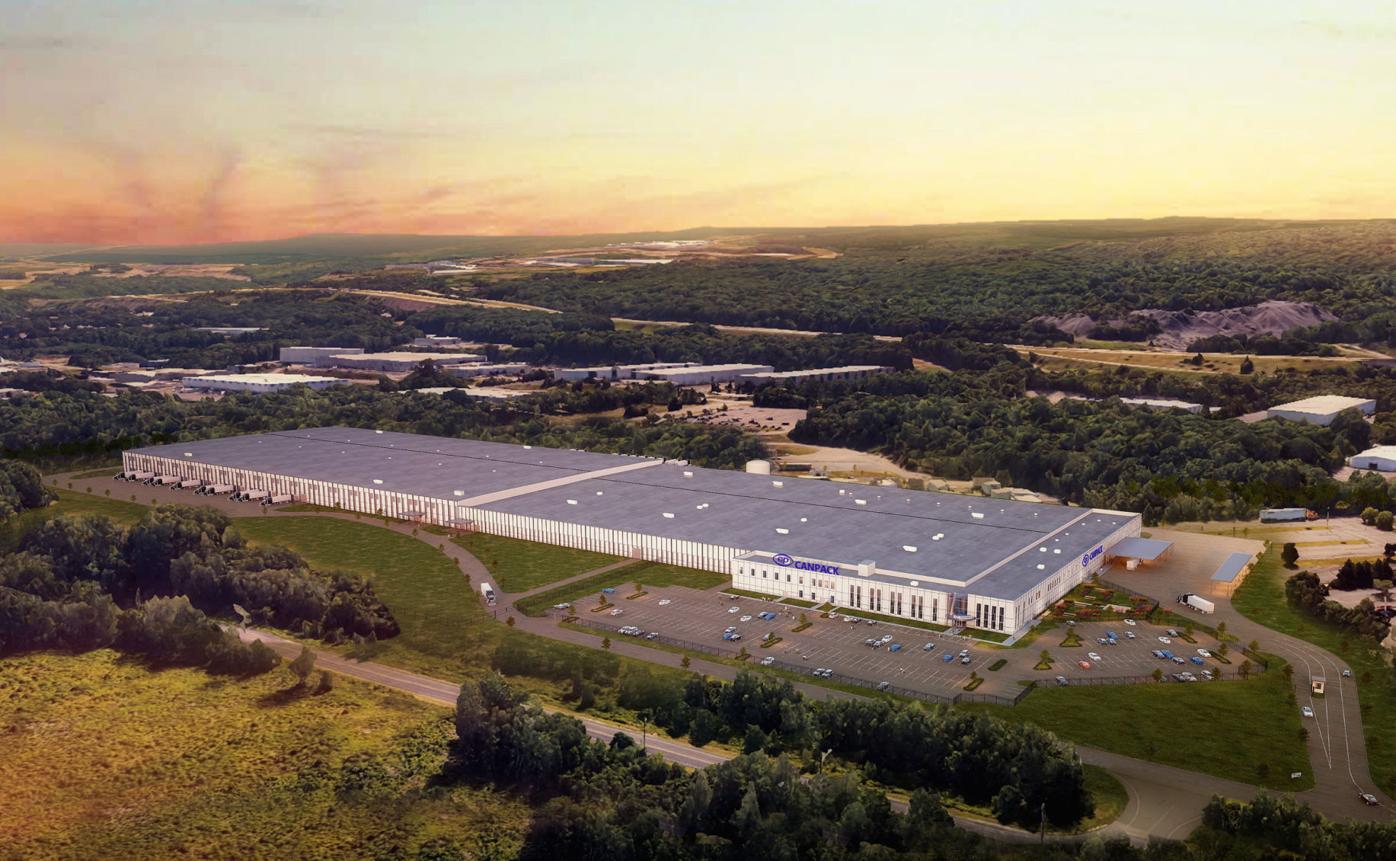 An architect’s rendering shows what a new beverage can manufacturing facility in Olyphant on the site of the former Cineram plant. The new facility is being built by Canpack Group, a subsidiary of Berks County Giorgi Global Holdings Inc. 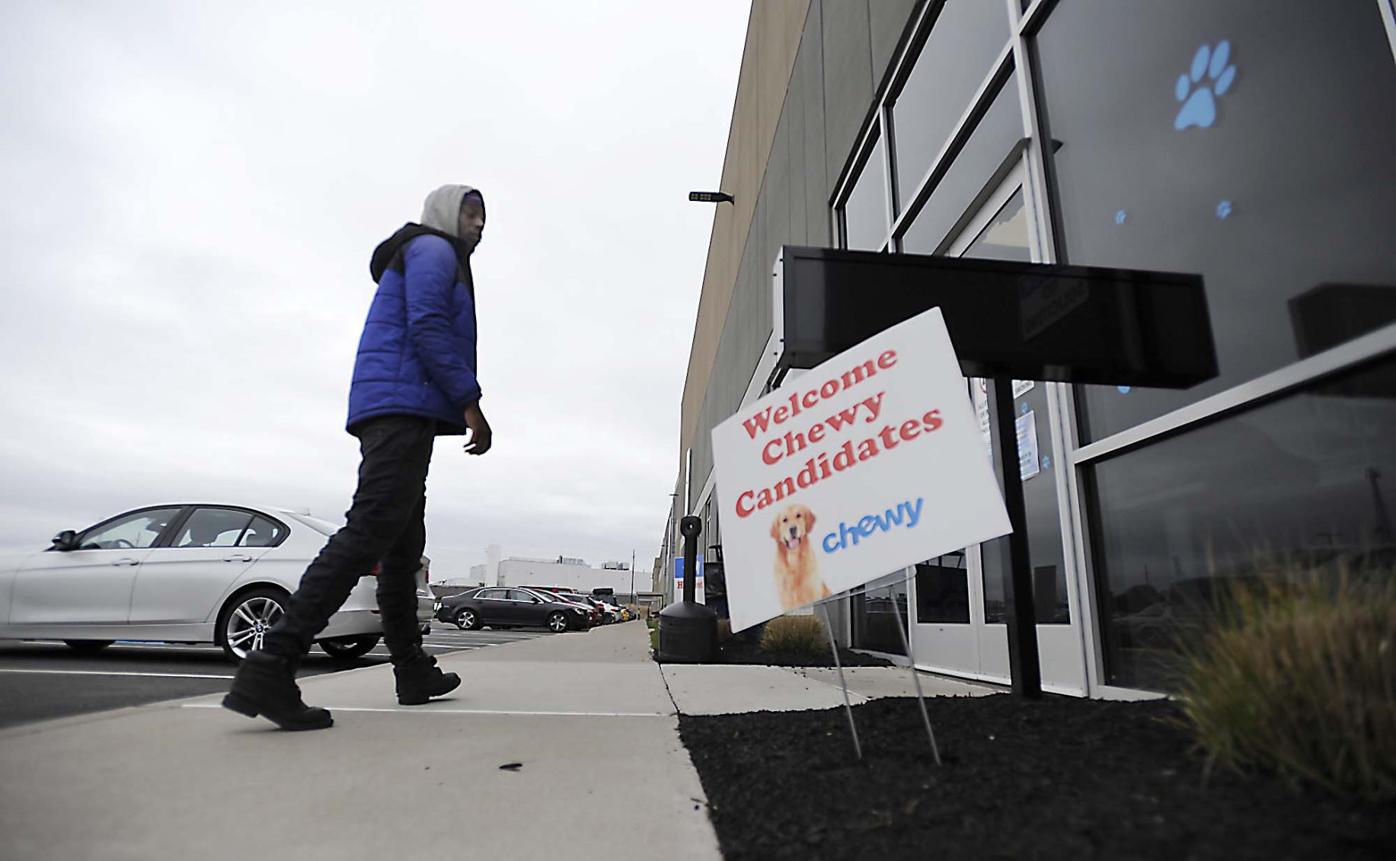 A job seeker walks into Chewy in Hanover Township. 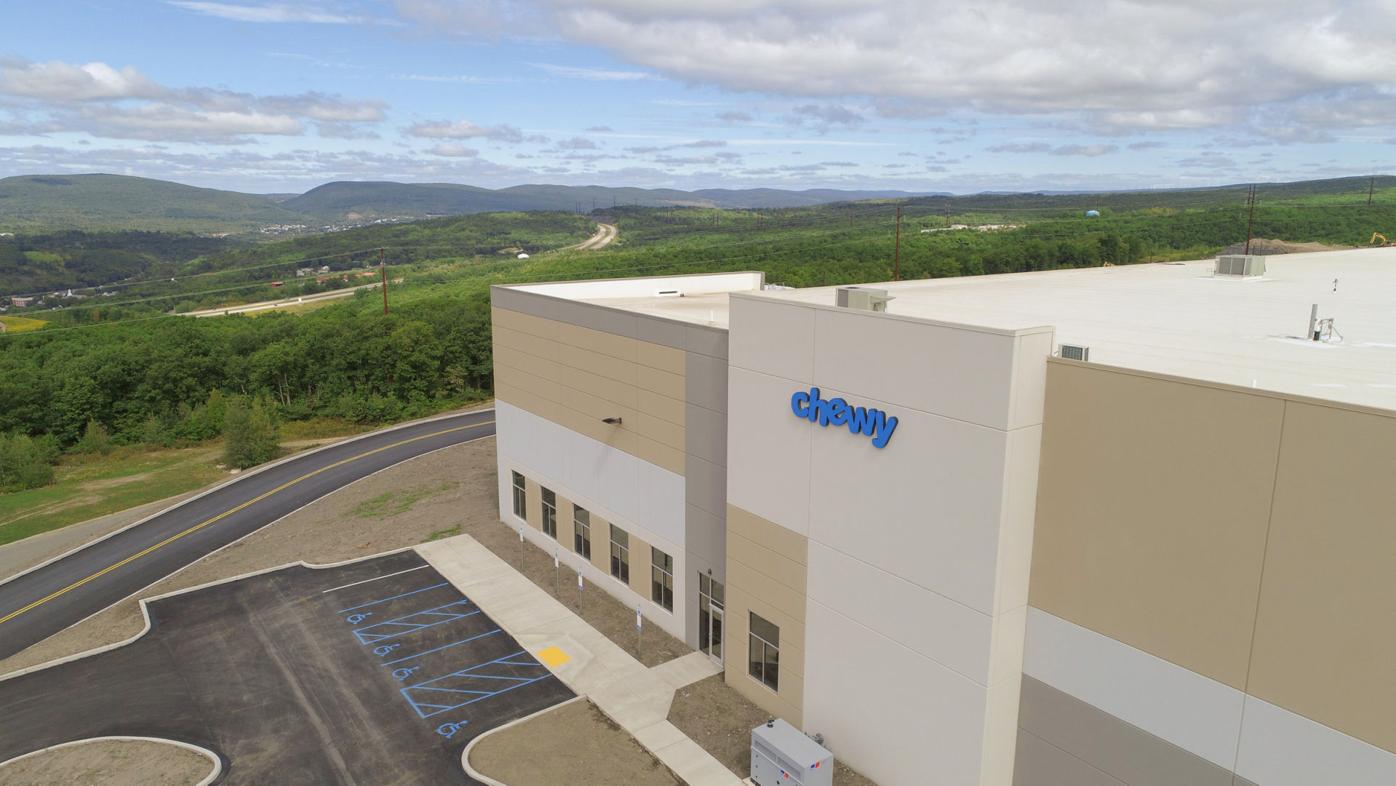 Dennis Williams of Archbald make sure boxes move along line at the Chewy.com facility in Hanover Township. Chewy, an online retailer of pet food and other pet-related products, opened an 800,000-square-foot fulfillment center.

An architect’s rendering shows what a new beverage can manufacturing facility in Olyphant on the site of the former Cineram plant. The new facility is being built by Canpack Group, a subsidiary of Berks County Giorgi Global Holdings Inc.

A job seeker walks into Chewy in Hanover Township.

Northeastern Pennsylvania has become a magnet for manufacturing and distribution companies that are promising thousands of good-paying jobs, even as much of the country struggles with high unemployment.

Coronavirus lingers throughout most of the country, but with a ready and able workforce, low taxes and other amenities.

“We have about seven companies that have signed deals that just have not been announced,” said John Augustine, president and chief executive officer of Penn’s Northeast, the nonprofit economic development agency for Lackawanna, Luzerne, Monroe, Pike, Wayne, Schuylkill, Carbon and Columbia counties.

“Five manufacturers and two distribution centers with over 2,000 new jobs coming,” Augustine said. “In addition, between Ball (Corp.) and CANPACK and some others, that’s about 1,200 jobs already.”

Ball plans to hire 230 people to work at the facility it is retrofitting in Jenkins Township, on the former site of the Techneglas plant. The company produces aluminum packaging for beverage, personal care and household products, as well as aerospace and other technologies and services primarily for the U.S. government. Ball plans to begin production at the Pittston area facility around mid 2021.

“Ball chose the Pittston location for its new facility due to the infrastructure in place, the location’s proximity to main distribution routes, the regional labor base, and the cooperation of state and local officials during the site selection process and Pennsylvania’s focus on sustainable growth,” said Scott McCarty, a spokesman for Ball Beverage Packaging North & Central America.

CANPACK, which also produces metal packaging, plans to fill 400 executive, professional and technical manufacturing jobs within three years at its new facility in Olyphant, according to a news release from Gov. Tom Wolf. The facility will be on the former site of Cinram, a CD producer that closed in 2018. That building has been demolished and will be replaced by a nearly 1 million-square-foot facility.

Chewy, an online pet supply company, plans to expand its Pennsylvania operations into the Valley View Business Park in Archbald, where it will create 1,000 full-time jobs over the next three years. The Florida-based company with locations in 10 states currently operates fulfillment centers in Wilkes-Barre and Mechanicsburg.

“This region has the perfect mix of a few key things we look for at Chewy,” said Gregg Walsh, vice president of fulfillment center human resources. “Whenever we evaluate a new location for a fulfillment center, we closely examine the critical areas of optimal scalability and sustainability of the market. In considering the Archbald area, one of the most important things we considered was the strength of the labor market, which is why we currently have more than 500 open positions to fill at both of our local facilities through the end of the year; these include both part-time and full-time positions. Additionally, we offer competitive compensation for all positions and benefits for those who join us full-time.”

The company will lease a 1-million-square-foot warehouse for 10 years in the business park. SLIBCO (Scranton Lackawanna Industrial Building Company), the not-fo-profit industrial development arm of the Greater Scranton Chamber of Commerce, developed the business park as part of a partnership with The Nature Conservancy and the state and federal government.

“People want to go back to work,” Augustine said. “There is work. They should not wait until until their unemployment runs out. Be first in line rather than last in line.”

He said some of the new companies coming is are offering starting salaries of $20 an hour, $25 or more for skilled positions. CANPACK jobs would pay as much as $60,000 a year — just over $28 an hour — the highest-paying jobs Augustine has seen come into the area in the 25 years he has worked in economic development.

“Other than Texas, we have the lowest minimum tax costs,” Augustine said. “You can reach a third of the U.S in one day’s drive and half of Canada. We’re low in taxes and have an affordable and available workforce, and we now have great wages. We’re going to come back even stronger after this pandemic is over.”

He said many of the leads area officials get are from international companies looking for East Coast U.S.-based operations.

“In the last year, manufacturing is finally gaining back its foothold in Northeastern Pennsylvania,” he added.

Augustine said the region also has the technical schools that could turn around programs to train workers for a specific company. The area also has good schools, professional baseball and hockey teams, skiing, hiking and affordable and reliable utilities, he added.

“There are very few places around the country that offer all those amenities,” he said.

Amy Luyster, a vice president of the Greater Scranton Chamber of Commerce, said there has been tremendous interest in the area the past couple of years for distribution warehousing, in part because of the proximity of the intersecting Interstates 81, 380 and 84.

“We draw a tremendous amount of interest, even nationally,” Luyster said.

She said that Northeastern Pennsylvania, including south to Schuylkill County, has seen a tremendous amount of e-commerce warehousing developed.

Luyster said CANPACK has razed the former Cineram facility in Olyphant since the company announcement in July that it would build and operate a manufacturing plant there.

“Not only is it bringing 400 new jobs to Lackawawanna County, it’s reuse of an existing site,” she said. “Chewy.com is bringing a thousand new jobs.”

Luyster echoed the same reasons for outside companies’ interest in Northeastern Pennsylvania.

“First and foremost is our location,” she said, citing I-81’s accessibility to much of the East Coast. “And a large percentage population is on the East Coast.”

She also cited the availability of land and cost of doing business — the labor force.

Ball Corp. found a facility already constructed on the site of the former Techneglas, which manufactured the glass covers of picture tube televisions. That plant closed in 2004 and the building was turned into a warehouse, distribution and manufacturing center.

Bala Cynwyd-based IDC Property LP purchased the Techneglas property from Pittston Industrial LLC for $5.2 million in January 2013, and the site was renamed the Interstate Distribution Center.

The original structure and its 170-foot-high silos were demolished in 2014 and 2015. In 2018, developers Endurance Real Estate Group LLC, of Radnor; Blue Vista Capital, of Chicago, and Square Mile Capital Management LLC, New York, announced they secured a $54.35 million loan to build a speculative 1.078 million-square-foot bulk distribution facility on the former Techneglas site.