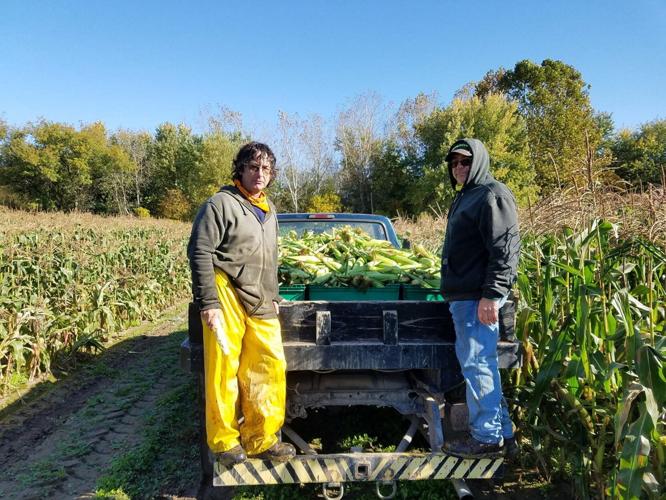 Gary O’Malia, left, and Larry O’Malia take a break from picking sweet corn last year on their Plains Township farm. High input costs will result in rising prices at farm markets this summer, yet profit margins for farmers are likely to stay the same. 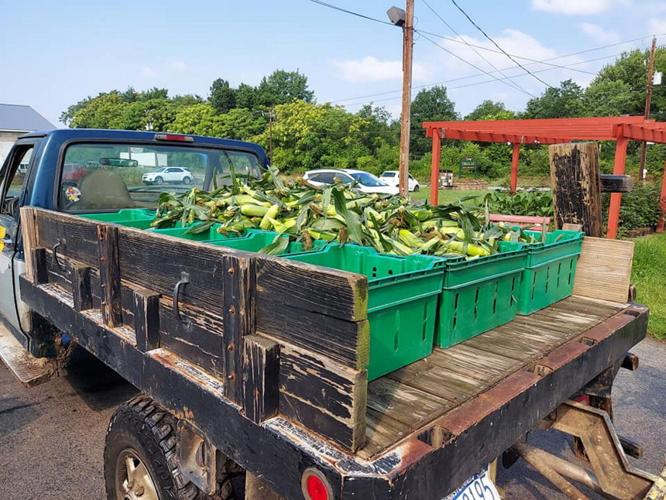 A load of sweet corn on Larry O’Malia’s truck picked last year and destined for his farmstand in Plains Township. O’Malia expects the per-dozen price for sweet corn to go up this year, but the actual amount won’t be determined until it’s ready to pick later in June.

Gary O’Malia, left, and Larry O’Malia take a break from picking sweet corn last year on their Plains Township farm. High input costs will result in rising prices at farm markets this summer, yet profit margins for farmers are likely to stay the same.

A load of sweet corn on Larry O’Malia’s truck picked last year and destined for his farmstand in Plains Township. O’Malia expects the per-dozen price for sweet corn to go up this year, but the actual amount won’t be determined until it’s ready to pick later in June.

Larry O’Malia’s farm in Plains Township borders the Susquehanna River, and the constant threat of flooding is like a dark cloud that hovers over him every year.

But now, another threat is making things even darker as produce farmers like O’Malia plant their summer crops.

Input costs for everything from fuel to fertilizer have skyrocketed, and farmers are struggling to balance price increases that customers can withstand and making enough to recoup the added expenses.

“At least every week a new price increase hits us,” O’Malia said. “Every day you wonder what’s next.”

For O’Malia, rising shipping costs for materials are hitting him hard right now. He recently received a trailer load of soil from Canada to plant mums in his greenhouse. Typically, the shipping fee for the soil is $450, but this year it was $1,700. Plug trays that are used to grow seedlings cost O’Malia $90 for three, yet the shipping for the same amount is also $90.

When it comes to his vegetable crops such as sweet corn, the price to plant has also skyrocketed and O’Malia is undecided on how much he’ll have to raise the price per dozen when it comes time to pick at the end of June.

If he wants to stay in business, O’Malia has no choice but to pay the higher costs, but he wonders if the resulting spike in his retail prices will be too much for customers to bear.

“If you overprice, there’s a certain point where people can’t pay it. They’ll use the money to pay for gas or heat,” he said. “You have more invested to produce a crop, so you have to get more return to cover that, but at what point is it too high? That’s what we’re faced with.”

Nescopeck Township produce farmer Harry Roinick, who owns Pumpkin Hill Produce Farm, expects to raise his sweet corn price a bit this summer. He was charging $5.50 per dozen last year, but other farmers he’s talked to say their price is going to be in the $7 to $8 range this summer.

“People need to understand that even though things at the farm market may cost more, it doesn’t mean we’re making more money,” Roinick said. “We’re just handling more money while trying to maintain the same profit margin that we had before.”

Columbia County produce farmer Brian Campbell, who is on the Pennsylvania Vegetable Growers Association board, said prices at retail farm markets are partly driven by the cost of vegetables at grocery stores. Retail farm markets can get a little more money for their produce because of the demand for local food, he said, but even that aspect has a limit.

“There’s a breaking point with what consumers can pay,” Campbell said. “I would expect this summer you’ll be paying $30 for the same amount of produce that cost $20 last year. When prices go up in the grocery stores, the retail price goes up as well.”

Based on his conversations with other produce growers around the state, Campbell said increased pricing is to be expected everywhere this summer.

“I don’t know of any input costs that haven’t gone up for vegetable growers this year,” he said.

Bill Hopkins, who owns Hopkins Farm in Falls, said his biggest cost increases have been in fuel, fertilizer and plastic used to grow vegetables early in the season. Many of the costs have doubled or tripled, he said, yet the true scale of how much the retail price will rise is yet to be determined.

“We have to see how the season progresses because weather and disease are always factors to consider,” Hopkins said. “One hail storm and you lose 50% of your crop, or a severe wind can knock down all of your staked tomatoes.

“With the money we put out to grow these crops this year, such an occurrence would be an absolute disaster.”

While Hopkins does sell retail at his stand, some of his produce is sold on the wholesale market. Price increases are a risk there as well, he said, because if it’s too expensive wholesale customers can truck in produce from out of state at a cheaper price.

“The quality might not be as good as what’s grown locally, but we can only hold our prices so much,” Hopkins said.

For that reason, O’Malia said 2022 could be the year that forces some produce farms to go out of business.

“If the pandemic didn’t get them, this might,” he said. “We’re doing this to be profitable, and if all you’re doing all this work to just break even, you might as well go fishing.

“We need certain things to function and we have to raise prices to pay for them, but it’s at the point for a lot of farms, they’re going to start taking a serious look at things.”