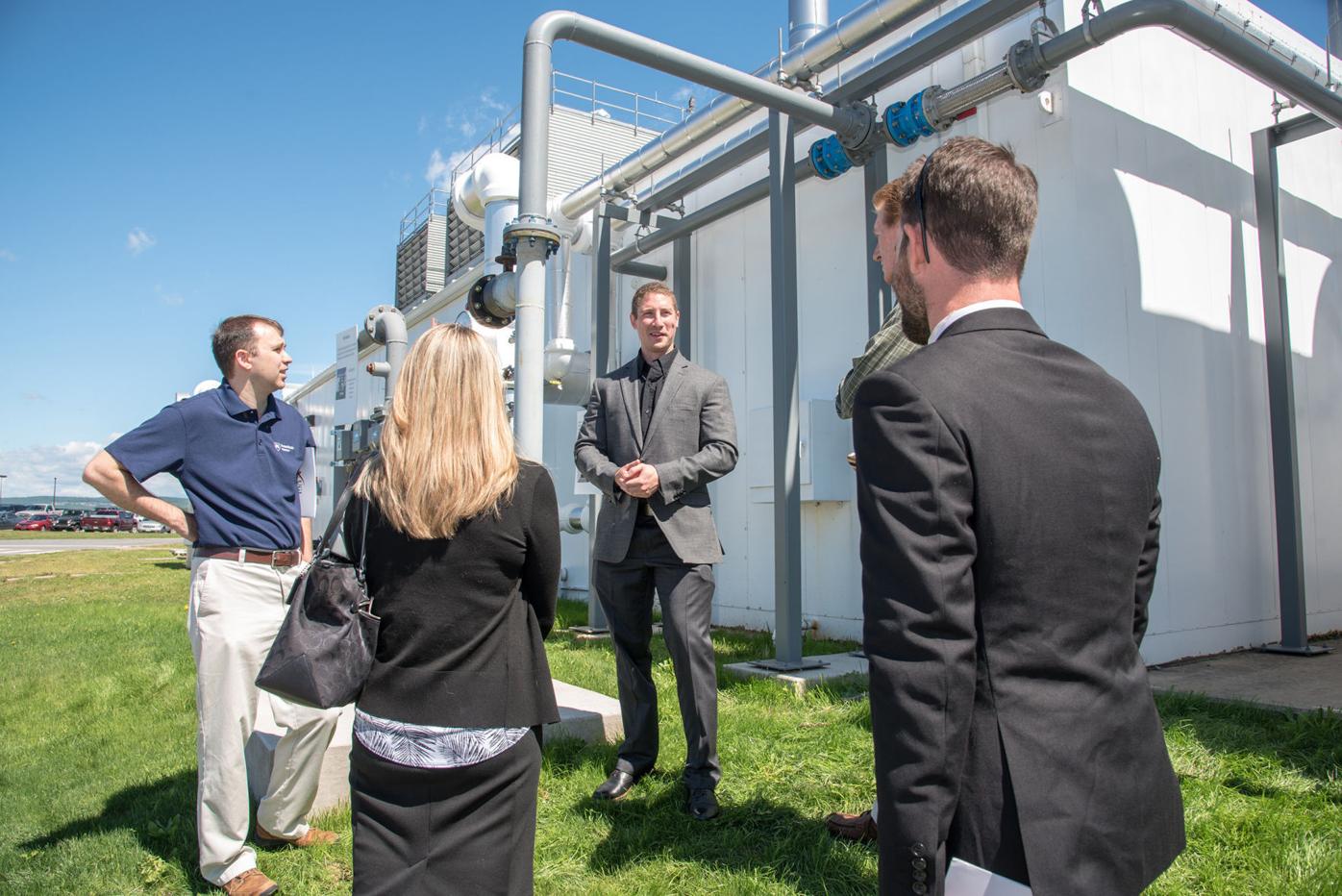 Jeff Malosiecki, center, a senior design engineer for UGI HVAC, gives a tour of the MSPs CHP system at Mohegan Sun Pocono in 2016. 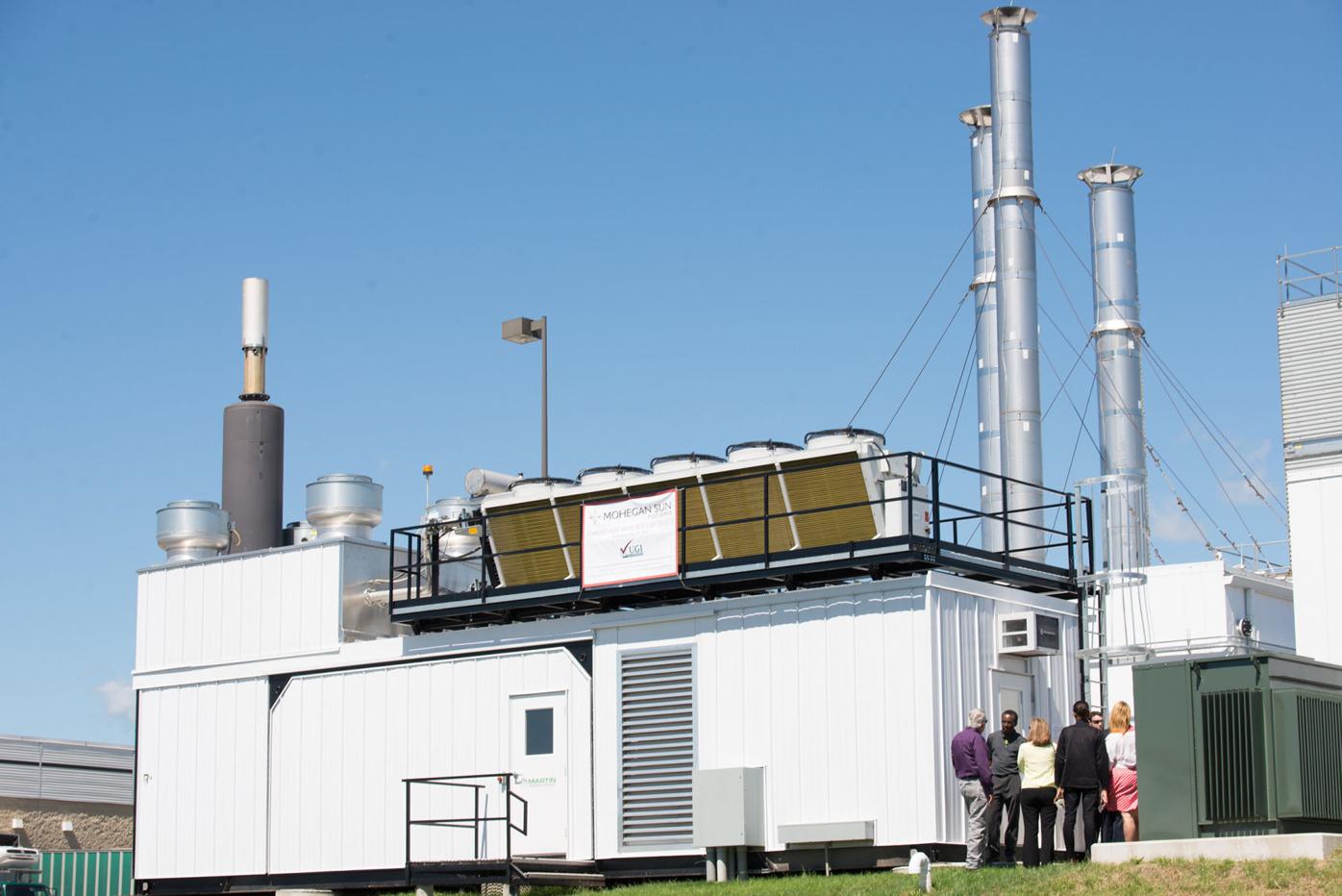 The MSPs CHP system is shown at Mohegan Sun Pocono in Plains Twp.

Jeff Malosiecki, center, a senior design engineer for UGI HVAC, gives a tour of the MSPs CHP system at Mohegan Sun Pocono in 2016.

The MSPs CHP system is shown at Mohegan Sun Pocono in Plains Twp.

Mohegan Sun Casino in Plains Township uses a combined heat and power (CHP) system fueled by natural gas to not only create a fifth of the electricity needed to power its casino, restaurants and hotel, but steam to heat its buildings and provide hot water for its kitchens and hotel rooms.

It has helped the casino resort save $600,000 a year in energy costs, according to Jeff Seidel, Mohegan Sun’s director of capital expenditures and a licensed mechanical engineer.

“It creates steam and electricity,” Seidel said of the system installed in 2016. “That’s why it’s very, very efficient.”

A CHP is sometimes called a cogeneration plant. The casino’s can create 820 kilowatts of electricity.

“They can create power cheaper than you can buy it,” he said. “It’s better for the environment.”

He said the waste steam helps heat the buildings and heat water used at the resort. The steam also is used to power turbines to create about 20 percent of the electricity.

It helps that the Northeastern Pennsylvania gambling resort is close to the Northern Tier gas wells, which has made the fuel less costly.

A drop in demand due to the COVID-19 pandemic also has brought prices down, said Iordanis Petsas, Ph.D., professor and chair of The University of Scranton’s Department of Economics and Finance.

“The domestic share prices of (natural) gas are so low,” Petsas said. “This reflects the current situation. It’s going to be a good period for businesses this season.”

“We can’t predict what the weather is going to be next week,” said John Augustine, president and chief executive officer of Penn’s Northeast, an economic development agency serving seven area counties.

That weather will determine how much heat businesses must generate.

Augustine added, though, Pennsylvania is fortunate to have plenty of natural gas. He said there are thousands of capped wells, but New York and New Jersey won’t allow pipelines out of Pennsylvania.

“Even propane prices are down,” Augustine said. “What we need to do as a state is get more people hooked up. We have wind, solar, nuclear, gas.”

David N. Taylor, president and CEO of the Pennsylvania Manufacturers’ Association, doesn’t paint as bright a picture for this heating season.

“Because there has been a slowdown in production due to the slowdown in the economy, it’s going to lead to higher prices,” Taylor said.

He said if Gov. Tom Wolf enacts his carbon tax, that will add to costs for businesses.

Taylor was referring to the governor’s executive action last year for a proposal to tax carbon emissions through a cap-and-trade program. Under the program, Pennsylvania would be part of a coalition of 10 Northeast states seeking to reduce carbon emissions from power plants by setting a cap on emissions. Plants whose admissions are over a certain limit could purchase allowances, increasing costs to consumers, while those not polluting would not have to purchase allowances, lowering that company’s costs.

Both the state House and Senate passed bills requiring the governor to get legislative approval before enacting the tax or joining a multi-state coalition, but Wolf said in mid-September he planned to veto it.

Taylor said that while the carbon tax would affect any power source, “If this is allowed to go through, it will amputate what remains of Pennsylvania’s coal-fired electricity generation.”

According to the U.S. Energy Information Administration (EIA), Pennsylvania’s marketed natural gas production, primarily from the Marcellus Shale, reached almost 7 trillion cubic feet in 2019, and the state is the nation’s second-largest natural gas producer after Texas.

Pennsylvania was the third-largest coal-producing state in the nation in 2018, and it was the second-largest coal exporter to foreign markets.