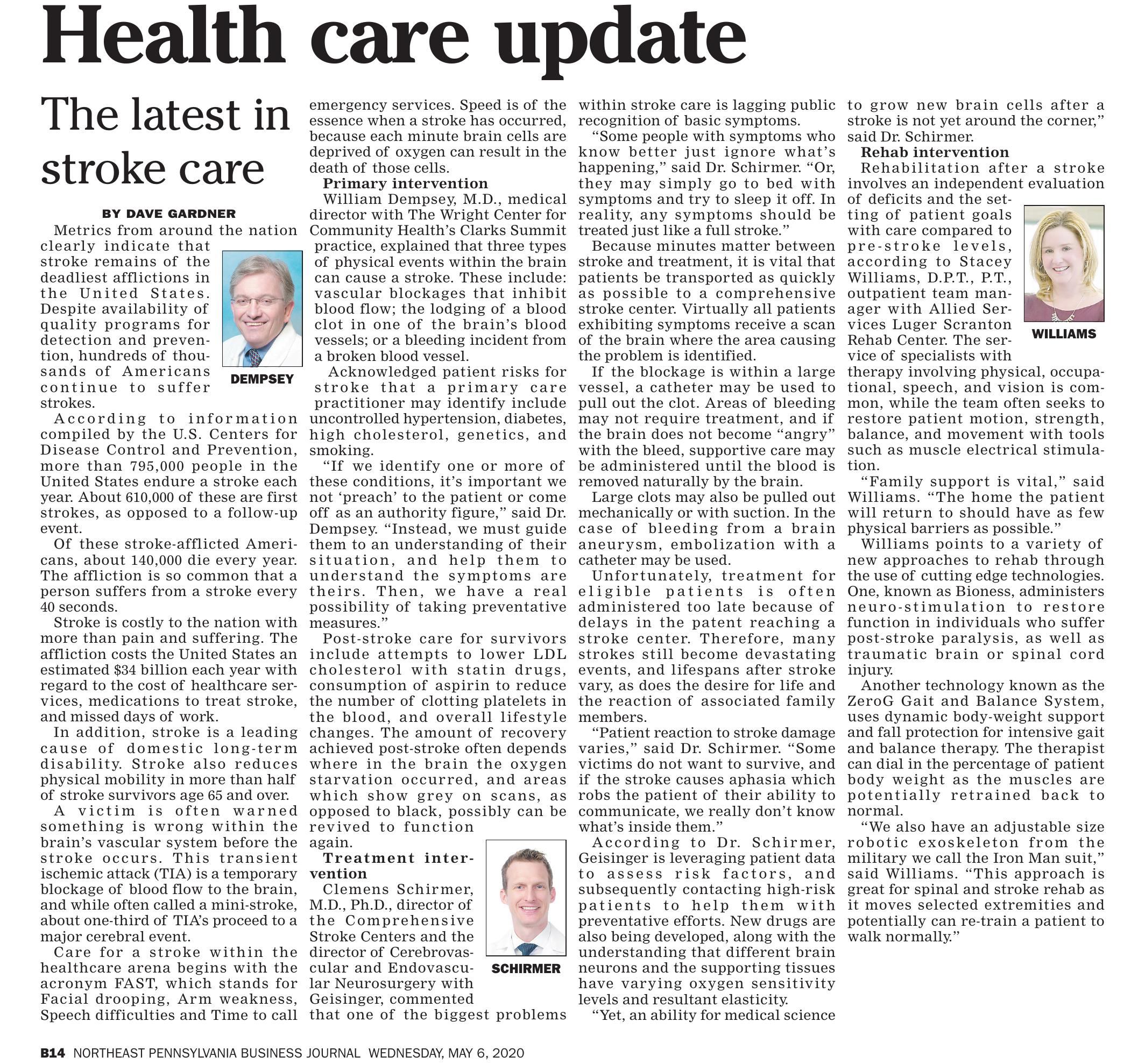 Metrics from around the nation clearly indicate that stroke remains of the deadliest afflictions in the United States. Despite availability of quality programs for detection and prevention, hundreds of thousands of Americans continue to suffer strokes.

According to information compiled by the U.S. Centers for Disease Control and Prevention, more than 795,000 people in the United States endure a stroke each year. About 610,000 of these are first strokes, as opposed to a follow-up event.

Of these stroke-afflicted Americans, about 140,000 die every year. The affliction is so common that a person suffers from a stroke every 40 seconds.

Stroke is costly to the nation with more than pain and suffering. The affliction costs the United States an estimated $34 billion each year with regard to the cost of healthcare services, medications to treat stroke, and missed days of work.

In addition, stroke is a leading cause of domestic long-term disability. Stroke also reduces physical mobility in more than half of stroke survivors age 65 and over.

A victim is often warned something is wrong within the brain’s vascular system before the stroke occurs. This transient ischemic attack (TIA) is a temporary blockage of blood flow to the brain, and while often called a mini-stroke, about one-third of TIA’s proceed to a major cerebral event.

Care for a stroke within the healthcare arena begins with the acronym FAST, which stands for Facial drooping, Arm weakness, Speech difficulties and Time to call emergency services. Speed is of the essence when a stroke has occurred, because each minute brain cells are deprived of oxygen can result in the death of those cells.

William Dempsey, M.D., medical director with The Wright Center for Community Health’s Clarks Summit practice, explained that three types of physical events within the brain can cause a stroke. These include: vascular blockages that inhibit blood flow; the lodging of a blood clot in one of the brain’s blood vessels; or a bleeding incident from a broken blood vessel.

“If we identify one or more of these conditions, it’s important we not ‘preach’ to the patient or come off as an authority figure,” said Dr. Dempsey. “Instead, we must guide them to an understanding of their situation, and help them to understand the symptoms are theirs. Then, we have a real possibility of taking preventative measures.”

Post-stroke care for survivors include attempts to lower LDL cholesterol with statin drugs, consumption of aspirin to reduce the number of clotting platelets in the blood, and overall lifestyle changes. The amount of recovery achieved post-stroke often depends where in the brain the oxygen starvation occurred, and areas which show grey on scans, as opposed to black, possibly can be revived to function again.

Clemens Schirmer, M.D., Ph.D., director of the Comprehensive Stroke Centers and the director of Cerebrovascular and Endovascular Neurosurgery with Geisinger, commented that one of the biggest problems within stroke care is lagging public recognition of basic symptoms.

“Some people with symptoms who know better just ignore what’s happening,” said Dr. Schirmer. “Or, they may simply go to bed with symptoms and try to sleep it off. In reality, any symptoms should be treated just like a full stroke.”

Because minutes matter between stroke and treatment, it is vital that patients be transported as quickly as possible to a comprehensive stroke center. Virtually all patients exhibiting symptoms receive a scan of the brain where the area causing the problem is identified.

If the blockage is within a large vessel, a catheter may be used to pull out the clot. Areas of bleeding may not require treatment, and if the brain does not become “angry” with the bleed, supportive care may be administered until the blood is removed naturally by the brain.

Large clots may also be pulled out mechanically or with suction. In the case of bleeding from a brain aneurysm, embolization with a catheter may be used.

Unfortunately, treatment for eligible patients is often administered too late because of delays in the patent reaching a stroke center. Therefore, many strokes still become devastating events, and lifespans after stroke vary, as does the desire for life and the reaction of associated family members.

“Patient reaction to stroke damage varies,” said Dr. Schirmer. “Some victims do not want to survive, and if the stroke causes aphasia which robs the patient of their ability to communicate, we really don’t know what’s inside them.”

According to Dr. Schirmer, Geisinger is leveraging patient data to assess risk factors, and subsequently contacting high-risk patients to help them with preventative efforts. New drugs are also being developed, along with the understanding that different brain neurons and the supporting tissues have varying oxygen sensitivity levels and resultant elasticity.

“Yet, an ability for medical science to grow new brain cells after a stroke is not yet around the corner,” said Dr. Schirmer.

Rehabilitation after a stroke involves an independent evaluation of deficits and the setting of patient goals with care compared to pre-stroke levels, according to Stacey Williams, D.P.T., P.T., outpatient team manager with Allied Services Luger Scranton Rehab Center. The service of specialists with therapy involving physical, occupational, speech, and vision is common, while the team often seeks to restore patient motion, strength, balance, and movement with tools such as muscle electrical stimulation.

“Family support is vital,” said Williams. “The home the patient will return to should have as few physical barriers as possible.”

Williams points to a variety of new approaches to rehab through the use of cutting edge technologies. One, known as Bioness, administers neuro-stimulation to restore function in individuals who suffer post-stroke paralysis, as well as traumatic brain or spinal cord injury.

Another technology known as the ZeroG Gait and Balance System, uses dynamic body-weight support and fall protection for intensive gait and balance therapy. The therapist can dial in the percentage of patient body weight as the muscles are potentially retrained back to normal.

“We also have an adjustable size robotic exoskeleton from the military we call the Iron Man suit,” said Williams. “This approach is great for spinal and stroke rehab as it moves selected extremities and potentially can re-train a patient to walk normally.”