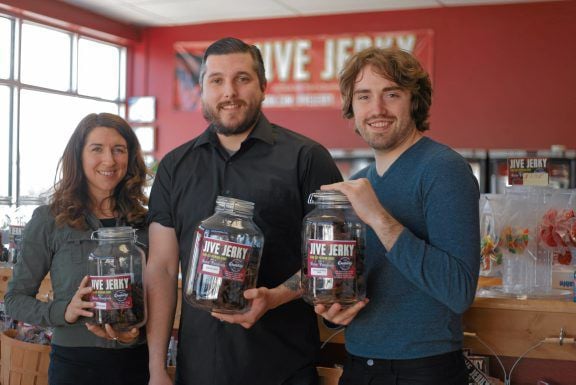 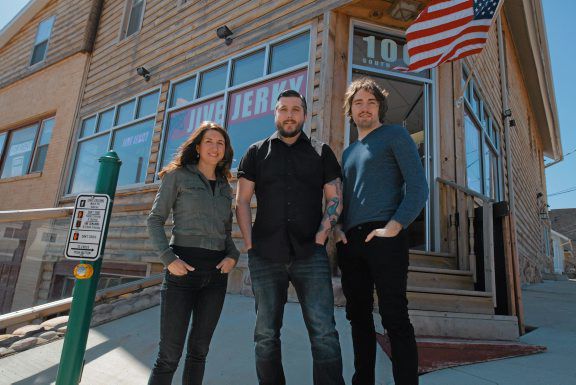 A pair of filmmakers traveling the country to document the audacity and faith of small business owners recently made a stop in NEPA.

Trish Dalton and John Sears are embarked upon an epic "small business road trip" on behalf of Capital One's Spark business card. The company describes their mission in these terms: Two filmmakers. Over 7300 miles. And real stories from your favorite small businesses across America. We're setting out to explore the greatness and diversity of the people behind American small business.

The duo's NEPA stop was at Jive Jerky in Moscow. What they found was an entrepreneur who took the leap driven by two commonly cited motivations. Business owner, Tim O'Grady said he founded Jive Jerky in 2011 for two reasons: He hated his job and he loved making jerky. It's a story Dalton and Sears say they've heard at every stop on their small-business odyssey.

"It takes passion to start a business, something many people miss in their everyday jobs," Dalton said.

O'Grady's particular passion was born over several football seasons. He said he and his father, Dennis, love watching the Green Bay Packers (the family is originally from Wisconsin). Their favorite "tailgate" food is their home-made jerky, a lean meat snack that can be seasoned and marinated into hundreds of different flavors.

The O'Grady's jerky is hand-cut from beef or pork and then marinated — sometimes for as long as a two days. The strips of meat are then cooked for a long time over low heat. The slow-cooking process fills the shop with a wonderful, mouth-watering smell. O'Grady's girlfriend, Fawn Dellavalle, who helps out in the shop, jokes about a friend who demands Tim's shirts after he's worked in the shop so she can inhale the scent.

Father and son perfected their process over many football weekends. "I was like MacGyver improving the recipes," O'Grady said, referring to the 1990s TV show featuring a resourceful agent solving complex problems with any item at hand.

The process results in a snack Tim says far surpasses anything you can get in a gas station, convenience store or supermarket. Tim describes that mass-produced jerky as "pressed, flat, disgusting cardboard meat."

When friends and family began asking the O'Gradys to make jerky for them —"Whenever we served it, we ran out," he said — Tim eventually realized he could sell his jerky via the Internet.

"The original plan was just to sell it online," he said, but the idea expanded because he fell in love with a street corner. "I kept driving past the corner (of Main and Church streets in Moscow) and the building was for sale. I kept wondering what I could do with it," O'Grady said.

"A lot of people may think this corner is only seen by people who live in Moscow," he said. "But that's not true. A Penn-DOT traffic study shows 17,000 cars go past this spot every day."

Filmmaker Trish Dalton said this isn't the first time she's heard a business owner say they fell in love with a location before they even had a business plan.

"We just met a woman in Woodstock (New York) who was so in love with a building, she and her husband bought it before they even know what they were going to do with it." Dalton said the building is now "Lotus," a gift shop with the added intrigue of once being a tavern where the woman's parents first met. "She didn't know that when she bought it, so that's quite a story," Dalton said.

Happily, O'Grady said his choice of locations has worked out better than he expected. The sunny, airy shop gets quite a bit of foot traffic, which in turn generates more business through word-of-mouth marketing. Customers even drive from as far as Allentown and Philadelphia, even though they can order online at www.jivejerky.com . Oddly enough, Tim said women constitute his biggest customer segment. He believes this may be because jerky is a high-protein, low-fat food that is compatible with many popular diet plans.

In his first six months running the Main Street business, Mr. O'Grady said Jive Jerky's flavors grew to about 30 varieties, ranging from garlic to sriracha. He said his "ghost pepper" jerky is one of the store's "fan favorites. "I can't keep it in stock," he said.

Meanwhile, he estimated the jerky output increased from about 75 pounds of meat per week to more than 300 pounds per week and said online sales become a bigger part of his business every month.

"No matter how much I make, it just sells out," Mr. O'Grady said.

To handle the demand and to ramp up production after getting interest from some distributors, Mr. O'Grady bought the former North Pocono Public Library for $98,500 in late 2013.

He plans for part of the building to function as a beef jerky production facility to increase his production by five- to six times, and the other part to open as a high-end coffee shop.

Trish Dalton said that the O'Gradys' commitment to improving Moscow is another hallmark of the small businesses she is profiling. "Small business is the backbone of America because that's what they do — they create community," she said.

To view Dalton and Sears' films, visit www.iamsmallbusinessproud.com or got to Jive Jerky's website, jivejerky.com .